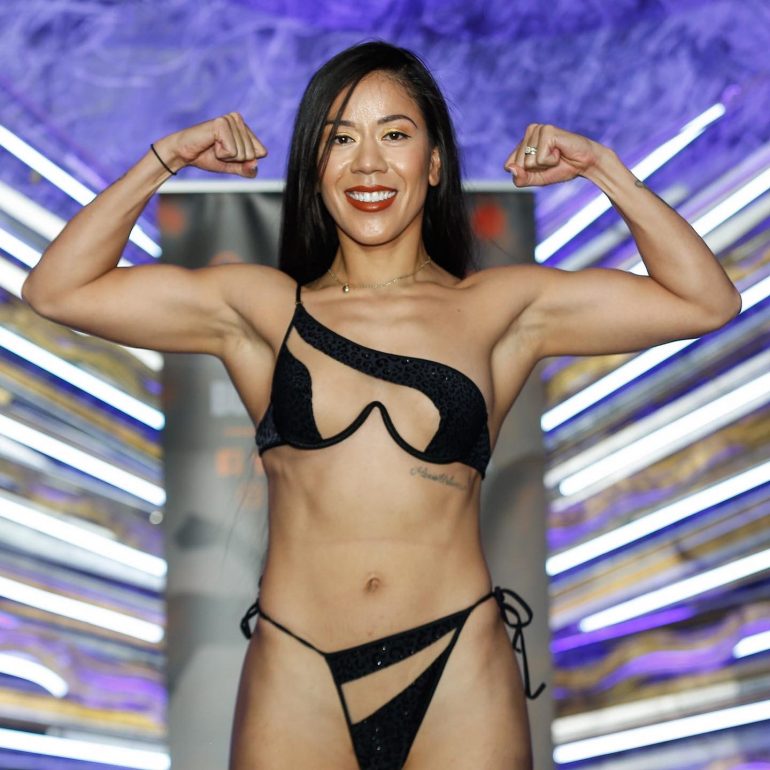 Sulem Urbina could have only dreamed of fighting in New York as a child. Growing up undocumented in Arizona, the Mexico-born Urbina was unable to compete in national tournaments as an amateur. Now the 32-year-old pro contender has made big strides in life, having voted for the first time as an American citizen this year, and now, finally getting to realize her dream of fighting in New York.

Urbina will meet Indeya Smith this Wednesday in an eight-round junior bantamweight fight at Sony Hall in New York City’s Times Square. The bout will be part of a five bout card presented by Boxing Insider which will be headlined by another Mexico transplant, Andy Dominguez, against Marvin Solano.

The fight is the second straight for Urbina at junior bantamweight, after fighting almost exclusively as a flyweight since turning pro in 2016. Urbina, who weighed in Tuesday at 114.8 pounds, had been struggling since moving up to the top level of the flyweight division, losing back to back decisions to Marlen Esparza and then-WBA flyweight titleholder Naoko Fujioka, before drawing with Tania Garcia to end 2021.

Urbina bounced back with a six-round split decision win over Jhosep Vizcaino in Los Angeles this past August.

“I took a brief break last year towards the end of the year. I was told I was gonna be fighting in February, then it was March, April, May, I had about 3-4 fights fall through. Then I decided to move up to 115 pounds because it was just taking a really bad toll on me to make 112,” said Urbina, who had a 96-17 amateur record.

“My last fight was at 115, and I did feel the difference. I feel I was able to keep my power in that division and I’m excited for the future now. I really want to stay busy. I hope to at least get five fights a year. Obviously I am working to get ranked at 115 pounds to be able to challenge for a title,” said Urbina.

The opportunity to fight in New York came about as a result of her relationship with promoter Lou DiBella, whom she has had discussions with about working together.

“Sulem Urbina is not only a good fighter and championship contender, she’s one of the best people in boxing,” said DiBella in a press statement.. “She’s a great ambassador for women in the sport, using her social media and developing brand to elevate boxing and other fighters. She deserves to be treated like an ‘A-side’ fighter.”

Getting past Smith may not be as easy as her record (5-6-2, 1 KO) suggests. The 26-year-old lost her last fight, a unanimous decision to the larger, unbeaten Mikiah Kreps in November, but had won three straight before that, including consecutive decisions over the unbeaten Ashley Sciscente earlier this year. The Texas resident has never been stopped, having lost decisions to former amateur standouts Gabriela Fundora and Christina Cruz.

“She’s a tough fighter, her record can be very deceiving. She’s fought a lot of tough fighters. She’s relentless, she comes forward, she throws a lot of punches, extremely aggressive, so I know that it’ll be a very good fight,” said Urbina.

The fight is her first since announcing her partnership with OnlyFans, the subscription service where people can pay content creators (Urbina’s costs $9.99 per month) to get exclusive photos and videos, and engage with them through messaging. Urbina isn’t the first boxer to work with them, with Shakur Stevenson, Ebanie Bridges and Andy Ruiz Jr. already partnering with the site. She says working with Only Fans will enable her to fund her career.

She knows the value of attention-grabbing photos: earlier this year a GoFundMe page for the local amateur boxing team raised over $2,000 to send the team to the Junior Olympics nationals after she teased that the link was to subscribe to her then-nonexistent OnlyFans account.

The vision, she says, is to get ranked at 115 pounds and build towards a fight with Clara Lescurat (8-0, 3 KOs), the current WBA junior bantamweight titleholder from Argentina. Urbina defeated Lescurat in 2015 at a qualifying event in Mexico for the PanAm Games, and hopes to replicate that effort as a professional.

“I just think they rushed her into becoming a champion. She’s not as experienced as a lot of other fighters. She’s a strong girl, she fights well but obviously I want that fight because I know I can beat her,” said Urbina.