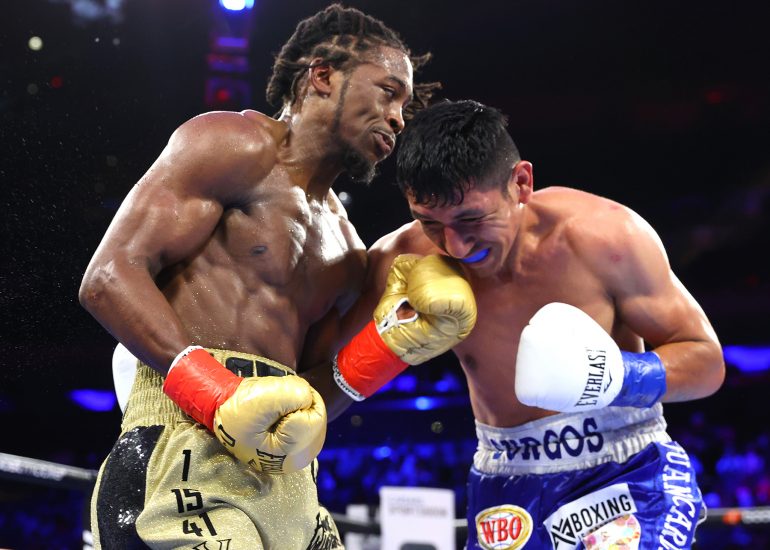 Davis (7-0, 5 KOs) showed off his arsenal in his first time going the eight round distance, pushing Burgos (35-7-3, 21 KOs) to the ropes with a quick jab and working the body early. The 23-year-old Davis of Norfolk, Va., looked close to being the first fighter to stop Burgos of Tijuana, Mexico, but Burgos showed he still had a granite chin at age 34.

Davis rocked Burgos with a right hand at the end of round 5, and then put a one-sided beating on Burgos in rounds six and seven, prompting a doctor visit to his corner before the beginning of the seventh. Davis showed he could create offense on both ends, landing four punch combinations, and then landing counter uppercuts when Burgos would try to return fire.

“He’s definitely a tough veteran. I was definitely trying to stop him in there. I had him hurt a lot of times, but he’s a veteran and knows how to survive,” said Davis, who earned the lightweight silver at the Tokyo Olympics.

Davis says he feels ready for the bigger fights at 135 pounds after defeating Burgos.

The Davis-Burgos fight kicked off the ESPN-televised portion of the card, which is headlined by Teofimo Lopez vs. Sandor Martin.

Earlier in the night, Joe Ward (8-1, 4 KOs) won his eighth straight bout since a freak loss in his pro debut, outpointing Frederic Julan (12-2, 10 KOs) by the scores of 79-73 on two cards and 78-74 on the third. Ward, 29, of Moate, Ireland controlled the ring with his southpaw jab, brushing off a cut above his left eye to beat the Frenchman to the punch consistently.

Ward, a two-time silver medalist at the amateur world championships, suffered a shocking defeat in his pro debut in 2019, getting stopped in two rounds by Marco Delgado after suffering a knee injury.

U.S. Olympian Delante Johnson (7-0, 5 KOs) breezed through his first eight-round assignment, stopping Mike Ohan Jr. (16-2, 9 KOs) with a barrage of punches in round 5. The 24-year-old Johnson of Cleveland, Ohio is a junior welterweight who made it to the quarterfinals of the Tokyo Olympics.