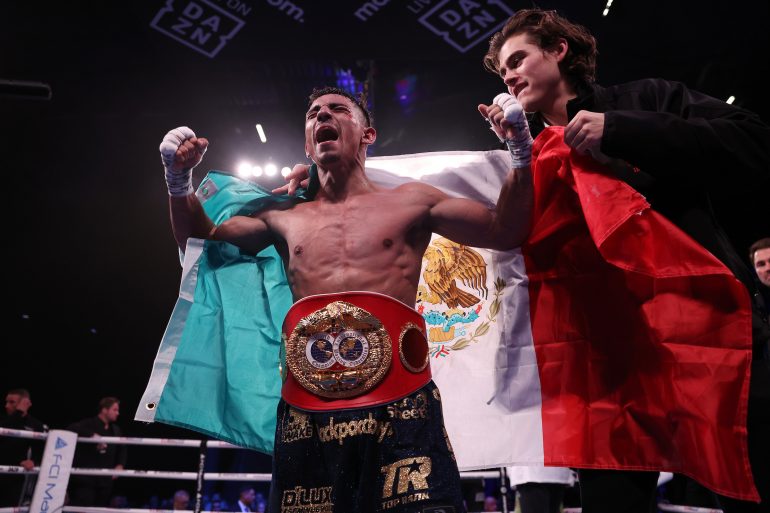 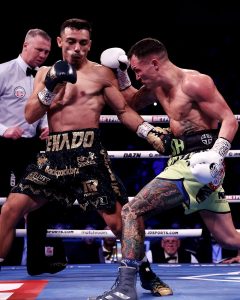 Lopez and Warrington go at it. Photo by Mark Robinson Matchroom Boxing

It was a rough-and-tumble fight. Lopez (27-2, 15 KOs) confidently walked Warrington down behind a well-timed jab and hard body shots. When the Leeds star tried to maul him in close, Lopez proved to have the physical strength to grapple on even terms. However, the 29-year-old Mexican was often nailed with crisp left hooks from Warrington, whose notorious roughhouse tactics – coming in with his head, rabbit punches and shots to Lopez’s hips and kidneys – clearly bothered the visiting challenger, who often complained to referee Bob Williams.

Warrington (31-2-1, 8 KOs), who was eyeing high-profile British showdown with Leigh Woods, admitted that he had trouble with Lopez’s awkward rhythm and odd-angle power punching during the first half of the bout but believed he closed strong enough to nick a close nod in his favor.

“It’s a 12-round fight,” a dejected Warrington, The Ring’s No. 5-rated featherweight, said during his post-fight interview. “I started slow, but after four or five rounds, I started working inside. He says I was fighting dirty but it was an accidental clash of heads (that produced a cut on Lopez’s left eye).

Both men left it all in the ring… what a fight! 💥#WarringtonLopez | @autozone pic.twitter.com/uVYPyPVtHF

“For the last three rounds all he wanted to do is hold. I’m absolutely devastated.”

However, Warrington said he isn’t ready to call it quits. He still has goals, such as the Woods fight and making at least one appearance on American soil.

“There’s still that fight in the U.S.,” said Matchroom Boxing boss Eddie Hearn. “I still see that fight with Leigh Wood. There’s still boxes to tick (on Warrington’s career) and he deserves those boxes.”

Lopez has earned his “boxes,” too. The spoiler has now won 10 consecutive bouts since dropping a 10-round decision to crafty southpaw Ruben Villa in May 2019. His victories include unbeaten up-and-comers Cristian Baez, Gabriel Flores Jr. and Isaac Lowe, as well as fringe contender Andy Vences.”

Lopez was seen as a fringe contender himself, but now with the IBF title, and his connections to Top Rank, he could be in line for a unification bout vs. whoever wins the WBO belt that Emanuel Navarret is expected to vacate upon his 130-pound showdown with Oscar Valdez (in February). Top Rank featherweights Isaac Dogbae and Ring’s No. 8-rated Robeisy Ramirez could vie for the vacant strap. Or, who knows? Maybe one of them will challenge Lopez. There’s also Michael Conlan (Ring’s No. 10-rated featherweight).