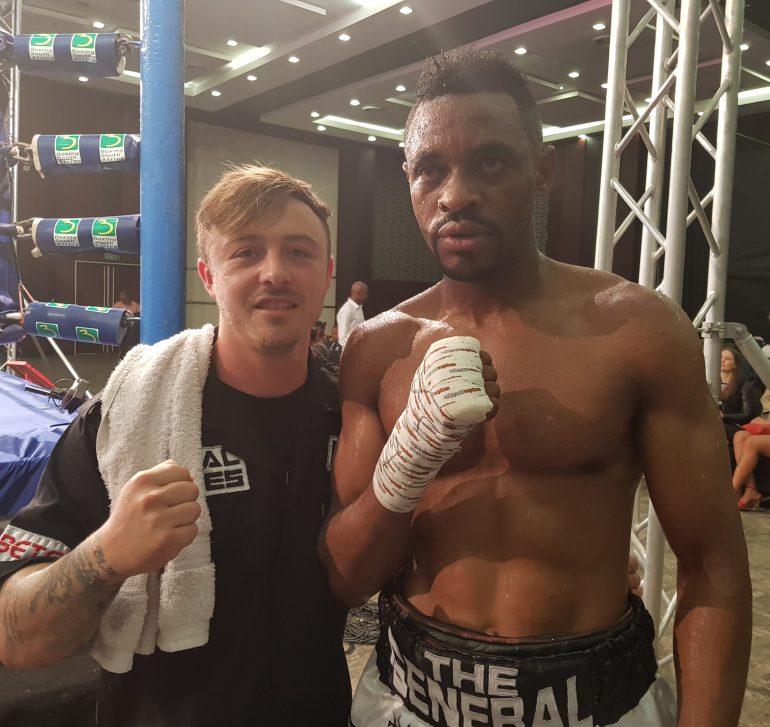 Junior middleweight Emmany Kalombo was simply too big and strong for Shiva Takran, who retired in his corner at the start of the fourth round at the Galleria Conference and Events Centre in Johannesburg on Friday night.

The first round began with Kalombo circling the ring while his opponent jabbed and threw a tentative combination from range which was picked off on the arms and gloves. Midway through the round Kalombo stopped circling and started coming forward, landing a pair of left hooks to the body as the round ended.

Thakran started the second by landing a double jab and a straight right that did nothing to stop the momentum of the South African based Congolese warrior. He got on his bicycle and attempted to throw punches at range, but it was clear that he did not have the power to get Kalombo’s respect. Kalombo landed a right, followed moments later by a left hook as Thakran tried to circle away. The Indian fighter tried his best to stick and move, but Kalombo simply jabbed to the chest and landed another big right as the round ended.

In the third it became clear that Kalombo was systematically dissecting his opponent and that the bout won’t go the 12-round distance. He landed a big left hook, followed by a straight right as Thakran tried to get out of harm’s way. He snapped his head back with his jab, dug in some body shots and smashed another right to Thakran’s head. The fight took on the appearance of a lion playing with its food. It was clear that Thakran was in a world of trouble.

It came as a relief when his corner would not let him go out for the fourth round. He seemed completely outgunned and would no doubt have absorbed a systematic beating. Shiva Thakran drops to 16-4-1 and lives to fight another day while Emmany Kalombo moves to 17-0, with all his wins coming inside the distance.

He has now won three in a row since his only defeat, a unanimous decision to Israil Madrimov in 2021. The time is ripe for another serious test.

In the main supporting bout, former IBF strawweight champion Deejay Kriel made a successful return after an absence of almost two years. He won an eight round majority decision over a very game Thembelani Nxoshe, with scores of 78-74 and 77-75 overruling a rather odd dissenting score of 76-76 from Tony Nyangiwe.

The ring rust was clear for all to see as Kriel stalked Nxoshe and struggled to get his timing right. Nxoshe took advantage, worked his jab, and landed hooks around Kriel’s high guard with the odd body shot mixed in. Kriel managed to land a right in the second, but Nxoshe possibly shaded the first two rounds.

An exchange finally broke out in the center of the ring in the third when both fighters decided to plant their feet and let their hands go. Kriel got the better of those exchanges. He brought his right uppercut into play in the fourth and landed a good left hook, followed by a left hook-right hook to the body and a straight right to the head to end the exchange.

Kriel found the range for his jab in the fifth as Nxoshe seemed to tire, but the East London fighter was not done yet. He tried hard to swing the fight back his way in a good sixth, landing a snappy right, momentarily boxing from a distance before Kriel came charging back with combinations of his own.

Nxoshe had some success in the seventh, but Kriel’s shots were crisper and more compact when he managed to close the distance

Kriel closed the show well in the final round, landing good combinations, a hard straight right, several left hooks, and an overhand right.

The fight was contested at a catchweight just over the flyweight limit. Kriel, who improves to 17-2-1 with eight stoppages, plans to return to junior flyweight, where he seeks a second world title. Nxoshe dropped to 19-10-2 but gave a very respectable effort.

Junior middleweights Darrin Rossouw and Jacques Tshikubu Muvud from the Democratic Republic of the Congo, stole the show, putting on an eight-round war. The fight was won by Rossouw by scores 0f 77-75, 78-75 and 78-74 but it didn’t deserve a loser.

The pair went at it hammer and tongs, round after round. Muvud got the better of the exchanges on the inside over the first half of the fight while Rossouw was better on the outside and in the center of the ring.

Rossouw displayed a terrific jab when he chose to use it and he seemed to wobble Muvud a couple of times. Every time it looked like he was about to overwhelm his opponent, the Congolese fighter came roaring back, throwing combinations to keep himself in the fight.

Rossouw remains unbeaten at 7-0 with four knockouts while Muvud drops to 7-2-1.

The card was promoted by Sifiso Shongwe, his 12th tournament of 2022, broadcast by ESPN Africa.