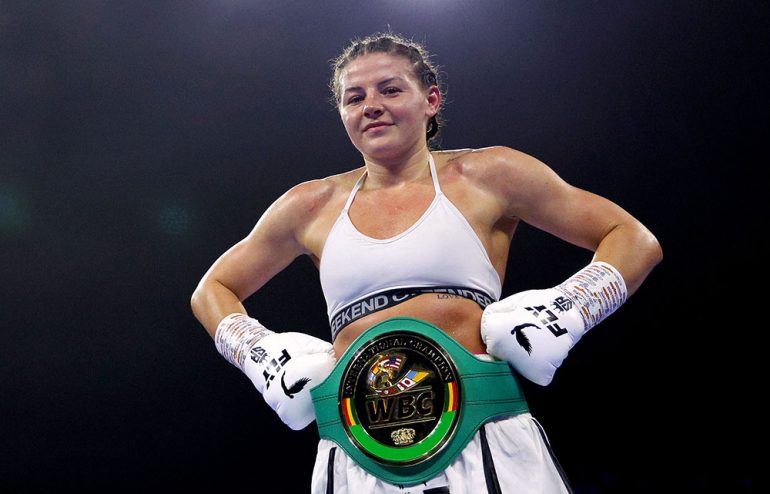 With women’s boxing hitting an all-time high in both quantity and quality, another extraordinary week of action generated a few changes in our trailblazing women’s ratings.

“Tremendous fight between these two gladiators,” said Wildalys Figueras-Snow, of Boxeo con Lipstick. “Ryan moved around the ring very well, while Sánchez, demonstrated her carats as a former world champion,” while columnist Mark Jones said that “Ryan is either trading punches at close range or boxing outside defensively; nobody will beat her when she learns to integrate the two simultaneously. As usual, Anahi Sanchez gave a great effort.”

In the bantamweight division, a mild upset generated another change, as outstanding champion Jamie Mitchell was defeated by 40-year old Nina Hughes in what was the latter’s fifth professional bout. The win was deemed good enough for Hughes to come in at No. 5, bumping out Melissa Parker in the process.

“I was very surprised to see the result,” said Argentine writer Yesica Palmetta. “Mitchell seems to me to be such an aggressive boxer that I thought she would be champion for a longer time.” Irene Deserti, Palmetta’s co-author of the book “Abran Paso” on the history of women’s boxing in Argentina, went even further by saying that “Hughes’ victory was a real surprise. Although I don’t think she can keep her championship for much longer, a victory is a victory, and she also deserves to enter (the ratings).”

In the junior flyweight division, a fight between the division’s No. 2 rated contender Evelin Bermudez and the current No. 2 strawweight Yokasta Valle failed to generate any changes in either division.

“I saw Yokasta being slightly better, applying good pressure, a greater number of blows and good combinations,” said Deserti. “She knew how to shorten the distance and get better results there. Evelin was more precise maybe, but I think she lacked punch volume and keeping distance with her jab to prevent Yokasta from gaining ground.”

With Valle allegedly returning to strawweight and Bermudez giving such a solid performance, the panel saw no reason to either demote or promote either one in their respective divisions.

A proposal was made to have Valle replace Natasha Jonas as our new No. 10 in the pound-for-pound ratings, which would have allowed Valle to return to that position after losing it to incoming member Alycia Baumgardner a few months ago. But there were not enough votes for that proposal to move forward.