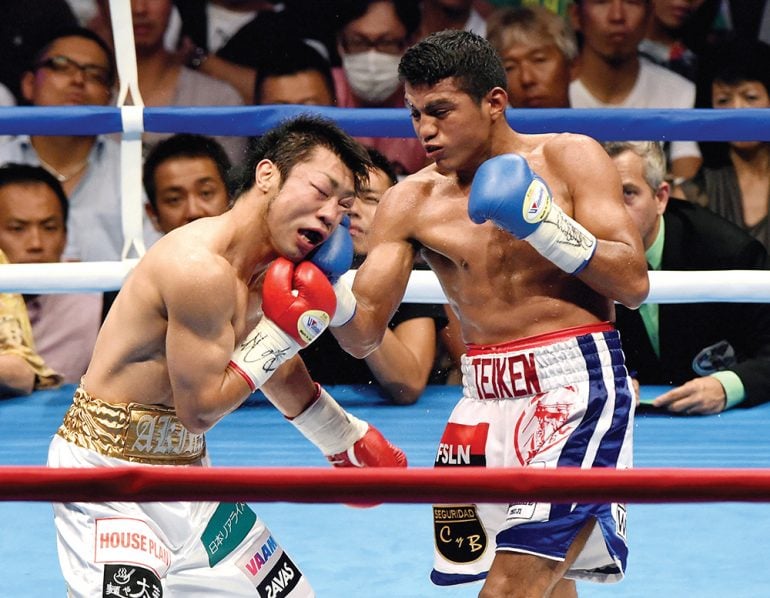 Roman Gonzalez earned the Ring Magazine and WBC flyweight championship with his ninth-round stoppage of rugged Akira Yaegashi in 2014. (Photo by The Asahi Shimbun via Getty Images)
29
Nov
by Anson Wainwright 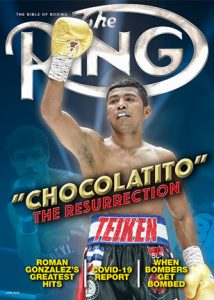 Roman Gonzalez graced the cover of the June 2020 issue of The Ring after he stopped then-unbeaten Khalid Yafai for the WBA 115-pound title in February of that year. The following article, penned by Anson Wainwright, was included in that magazine (which can be purchased at the Ring Shop).

Gonzalez, a four-division titleholder and future hall of famer, faces Ring junior bantamweight champion Juan Francisco Estrada in their much-anticipated rubber match on Saturday in Glendale, Arizona (streaming live on DAZN). Miraculously, the 35-year-old Nicaraguan, who is The Ring’s No. 1-rated junior bantamweight, is still on top of his game. To get an idea of how much he’s accomplished to date, keep in mind that this Greatest Hits only includes his fights from 2008 to 2016.

Roman Gonzalez was the standard-bearer for boxing’s lightest weight classes and helped pave the way for sub-bantamweights to appear on premium cable in the United States. As he moved up in weight, he proved time and time again how special he was, eventually earning the top spot in The Ring’s mythical pound-for-pound rankings during the middle of the 2010s.

This past February, three years after losing his No. 1 status and unbeaten record to Srisaket Sor Rungvisai, Gonzalez showed us how great he still is with an eye-opening destruction of Khalid Yafai to regain a portion of the junior bantamweight title. »

Gonzalez was born in the Nicaraguan capital of Managua on June 16, 1987. He endured a tough start to life.

“We had hard times like everybody,” Gonzalez (49-2, 41 knockouts) told The Ring. “My family is poor. Sometimes we did not have enough to eat. We were, however, a happy and united family.

“I am a third-generation fighter. My grandfather was a fighter; my father and uncles were fighters. My brothers have practiced the sport as well, but I am the only one who currently boxes professionally. I also have some cousins who box in Nicaragua professionally.”

Gonzalez reportedly compiled an 88-0 record during his amateur career, the pinnacle of which was winning a gold medal at the 2004 Central American Championships. He elected to turn professional and made his debut two weeks after his 18th birthday in his home country.

“Chocolatito” steamrolled the opposition, winning his first 16 fights inside the distance. In September 2008, he traveled to Japan and won his first world title, bludgeoning respected WBA 105-pound beltholder Yutaka Niida into defeat in four rounds. 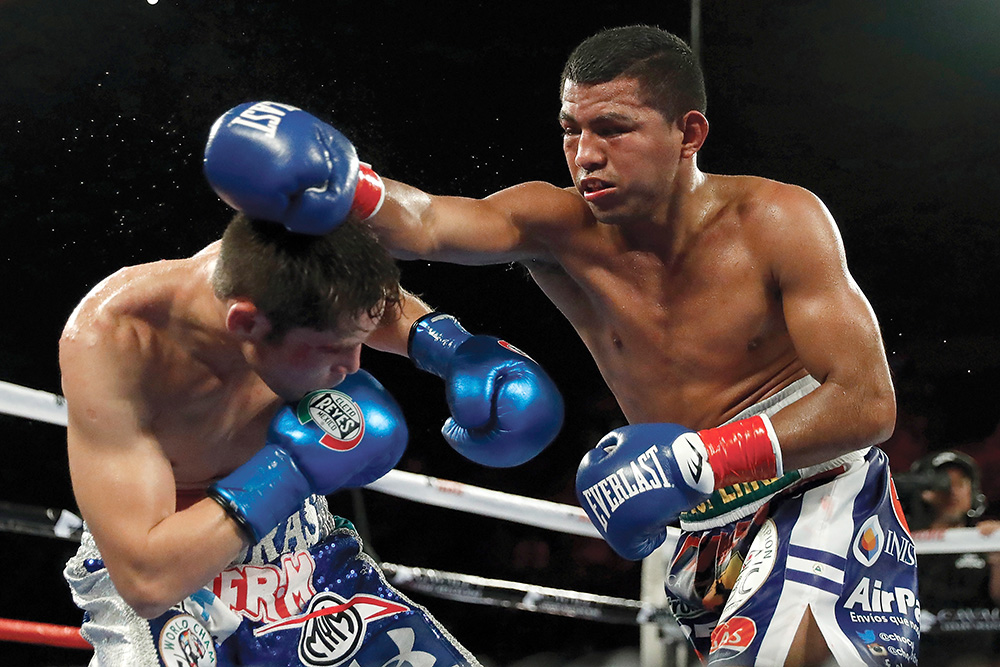 Roman Gonzalez made Nicaraguan boxing history on September 10, 2016, when he defeated Carlos Cuadras to win a major world title in a fourth weight class via hard-fought unanimous decision. (Photo by Josh Lefkowitz/Getty Images)

Having outgrown his division again, Gonzalez moved up to flyweight and eventually stopped Akira Yaegashi for the Ring and WBC titles in Japan. After one defense and a non-title homecoming bout, Gonzalez was back in the U.S., where, fighting on the undercard of Gennadiy Golovkin vs. Willie Monroe Jr., he was dubbed “Little Drama Show.” His next two fights were also on Golovkin undercards. It was arguably the middle performance, against Brian Viloria, that Gonzalez was at his best, stopping the four-time titleholder in nine rounds.

Once again, Gonzalez was looking to test himself and decided to step up to junior bantamweight and face then-unbeaten WBC beltholder Carlos Cuadras. The Nicaraguan was undersized but not underskilled, and he won a hard-fought unanimous decision.

Gonzalez lost for the first time in thrilling fashion against the relatively unknown Srisaket Sor Rungvisai in March 2017 by majority decision, though many felt he deserved to win. However, any controversy was rendered moot when the power-punching Thai knocked out Gonzalez in devastating fashion six months later. 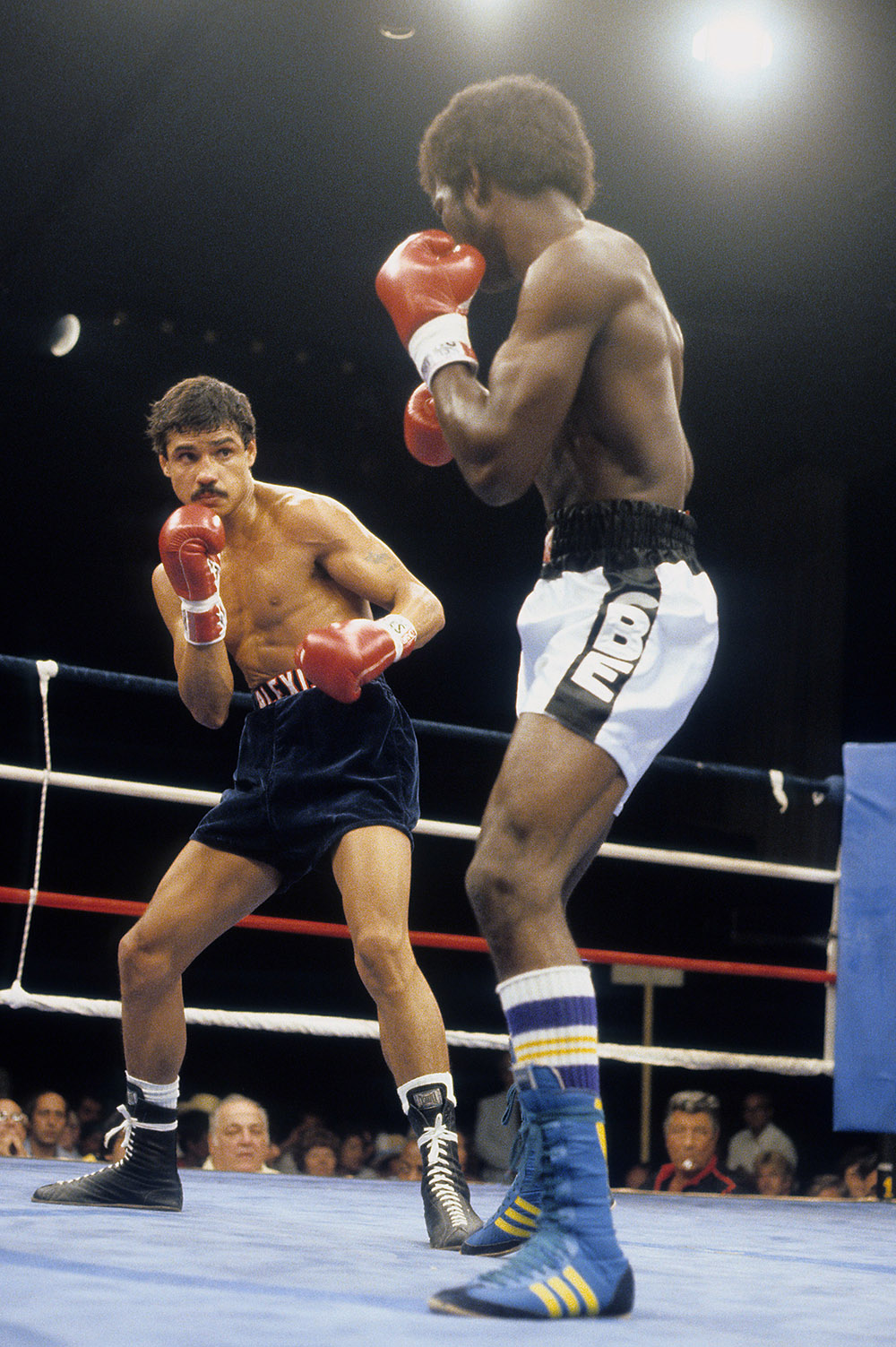 Alexis Arguello vs. Cornelius Boza-Edwards in 1980.

Gonzalez returned with a win before sitting out much of 2019 with a knee injury. After a December tune-up, the mighty Nicaraguan rolled back the years with a virtuoso performance, stopping the undefeated Yafai in nine rounds to add the WBA 115-pound title to his already impressive haul of titles.

Although he has surpassed the achievements of the late, great Alexis Arguello, Gonzalez is full of praise for his mentor.

“He taught me what it means to represent Nicaragua in boxing abroad,” he said humbly. “He was an international star and an ambassador of the sport. Most importantly, he was a good friend, a good person and somebody who really cared about the fighters.”

Gonzalez, now 32, is divorced and has three children. He lives in Managua on a farm that he bought after winning his third world title and called it “Quinta Teiken” to honor his Japan-based promoter, Teiken. Away from boxing, he helps children with cancer and belongs to a reforestation program called Guardabarranco. He also owns various properties and is involved in real estate in his homeland.

Gonzalez enjoyed looking back on his career, reminiscing on six career-defining victories for the readers of The Ring.

“It was a very beautiful experience to be able to go to Japan. I remember when I went to Tokyo, it was amazing to see so many buildings and to know I was going to meet the legendary Mr. (Akihiko) Honda (president of Teiken Promotions). To see Japan and the culture was a big blessing; it was definitely different from what I was accustomed to in my country.

“It was a very hard and difficult fight. Niida was very fast and very strong. I remember the fight perfectly well. In the second round, I started to pressure a little bit more and I was able to start hurting Niida. In the third round, I kept up the attack and felt I was hurting him more, and I felt it was a good opportunity to keep pushing. In the fourth round, we exchanged punches and they stopped the fight; both of his eyes were closed. He was a great fighter, and it was impressive to win a world title. I knew I needed to throw combinations, and they worked really well.

“When I returned to Nicaragua, there were so many people at the airport. We went to my neighborhood, Barrio La Esperanza, where everybody was waiting for me, and everybody was really happy. I was really happy with what I had accomplished. I met the president and he gave me a house; it was my first house. I was really happy, really joyful for all the merits I received, because at the same time I was able to help my family. Alexis Arguello told me it was very important to become a world champion but even more important to be able to maintain yourself as one. Alexis was very happy with me and felt very proud of the work he had done – Alexis trained me for that fight, my first world title, so many long hours. He was very happy I had won. He knew me better than anybody and what I had to offer. Alexis didn’t travel to Japan for that fight; he commentated on the fight for international TV.”

“I didn’t win my 108-pound title against Manuel Vargas; I won (the interim title) against ‘Chiquita’ Rosas in Japan. (Editor’s Note: Gonzalez was elevated to full WBA titleholder status in February 2011.) After the fight with Rosas, I was going to fight Kazuto Ioka, and Ioka paid a fee so he didn’t have to fight me. Then I was going to fight Juan Carlos Reveco, and he vacated the title and didn’t want to fight. Then I became interim champion and then I became full champion. I made five defenses and moved up in weight. I remember at the beginning, in Mexico, I wasn’t treated like I am now. The first fights in Mexico were very hard. They wouldn’t pick me up at the airport. They made me wait in a tent before the fight. I wasn’t given too much peace before the fights, but that changed with time. The Manuel Vargas fight was a very, very difficult fight. I definitely like to fight in my opponent’s backyard; it’s scary to fight in their backyards, but it’s a lot scarier to fight in my country, because there is a lot of additional pressure.”

“I remember my second fight in America was very difficult also, against a southpaw (Ramon Garcia Hirales). It worked out well, and to be able to fight ‘El Gallo’ Estrada on a bigger stage was really good, because I had already fought a lot of Mexican warriors. I fought with diarrhea against Omar Salado. I fought so many top prospects and Mexican warriors in Mexico. So to fight Juan ‘El Gallo’ Estrada meant a lot, and on a bigger stage. I knew there was pressure, but it made me fight even better; I want to overcome any type of obstacle. It was an incredible fight, and I’d like to fight him again. I believe when I fought Estrada, he had trained very well and was in great condition. And maybe it wasn’t known at the time, but that helped him to be in the position he is in today (Estrada is the current Ring junior bantamweight champion). It was a very difficult fight. It was a great fight; that’s why I would like to repeat that fight someday.”

“It was a great fight. It was great to be able to win a third world title. And to win the Ring title was an even bigger accomplishment, because I remember great champions like Alexis Arguello and Oscar De La Hoya who got a Ring belt. It meant not to be just a champion but to have the heart of a champion. … It was great to be able to tie Alexis’ record (becoming a three-division titleholder) but I have always said even if I won five or six world titles, Alexis will always be No. 1. He was like a father figure. He was my mentor; he taught me how to be a world champion, to believe I could be one. He was the first world champion of Nicaragua, and that meant so much to him. He paved the way for the rest of us. Even if I win more world titles, I’ll never be as good as Alexis Arguello. He’ll always be No. 1.”

“It was incredible to be on the same card as Gennadiy Golovkin; I admire him very much. It meant a lot. He is a great champion. I send him my blessings and greetings. It was probably one of my best performances. That and my (previous) fight with Edgar Sosa catapulted my fan base within the boxing world. I liked it so much because of the history that Brian Viloria has and what a great world champion he had been.”

“It was one of my most memorable fights, not just to beat a bigger Cuadras but to win and fight against a champion at junior bantamweight and to take his unbeaten record (Cuadras was 35-0-1). It was a very difficult fight. I had to be in the best physical condition of my life. It was a great feat. I had been received by people at the airport (after previous fights), but not as much as when I had beat Cuadras for the fourth world title. So many people came to see me. I may fight and win more world titles in the future, but I don’t think I’ll ever be received by so many people and so much love as I was after that fight.

Carlos Blandon helped coordinate and translate this feature. The Ring appreciates his assistance.