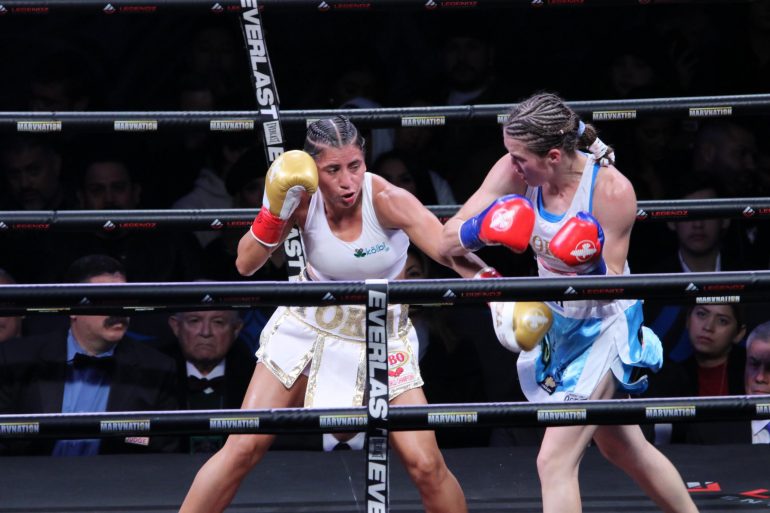 Valle outboxed Evelyn Bermudez, winning by majority decision Saturday night at Dignity Health Sports Park. One judge scored the bout 95-95, while the other two judges scored the bout 99-91 and 97-93 for Valle, who improves to 27-2, 9 knockouts.

Saturday was a compelling clash between fighters ranked by The Ring. Valle is ranked No. 2 in the female rankings at 105 pounds, while Bermudez is ranked No. 2 at 108 pounds.

Bermudez landed left-right combinations to the head early on in the fight. It took Valle a round or two to adapt to Bermudez’s style, but once she was able to, she was able to outbox Bermudez, including landing counter left hooks or straight right hands to the head.

Towards the end of the third round, both fighters stood in the center of the ring and exchanged combinations to the delight of the pro-Valle crowd at Dignity Health Sports Park.

Bermudez continued to be game, but she continued to leave herself open to be countered to the head. A right hand to the head stunned Bermudez in round 7, but Valle was unable to follow up as Bermudez was able to hold on.

Whether it was from distance or in the pocket, Valle displayed a more-effective skill-set, mixing her attack and connecting with combinations. Despite the difficult start, Valle was able to adapt and dominate the rest of the way.

Valle hopes to continue fighting the best fighters, regardless of the weight class, including WBA Female world 105-pound titleholder.

“Evelyn was a difficult opponent,” said Valle after the fight. “I did think about getting the knockout, but I had to take into consideration her length and distance. As far as fighting often, tell me who has fought as active as me? I’ve fought five world title fights in 11 months.

“As far as my next fight, I would like to fight Seniesa Estrada next. It doesn’t matter if that fight takes place at 105 or 108 pounds. I want to fight the best. If that’s what the fans want to see next, then yes, I will fight her.”