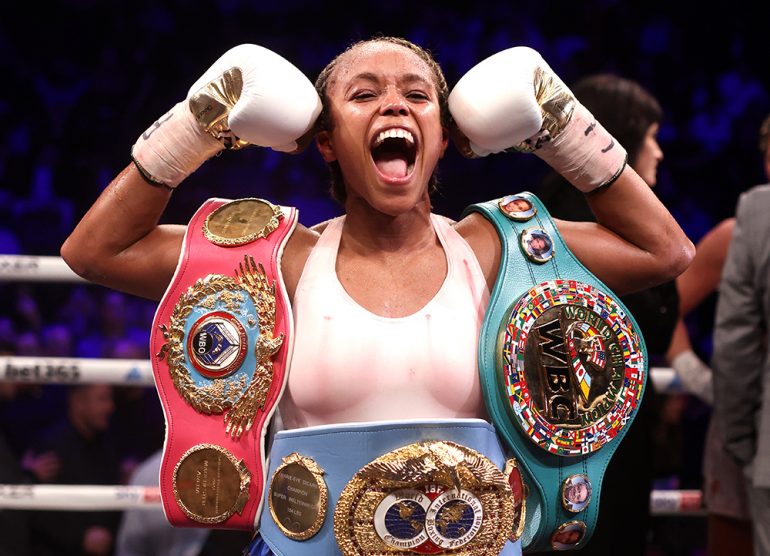 Another great weekend of action in a historic month of November for women’s boxing yielded some interesting results and a few movements in our Women’s Ratings.

In the most important fight of the week, “Miss GB” Natasha Jonas lifted the Ring junior middleweight belt left behind by Claressa Shields due to inactivity in the division, and she did so impressively enough to make an even more important jump, making her debut in the pound-for-pound rating at No. 10 thanks to her solid win over the former No. 1 in the division, Canada’s Marie Eve Dicaire.

“Jonas used her intelligence against Dicaire in this clash of southpaws,” said author Yesica Palmetta. “Natasha Jonas, despite being a few inches shorter in height, moved as if she had been taller (than Dicaire) for most of the fight.”

Lupi Gutierrez-Beagle agreed by saying that “Jonas looked so much smaller than DiCaire, yet managed to find every opening to DiCaire’s body and face,” while historian Malissa Smith said that “Jonas did a good job keeping DiCaire at bay and had a clean win. She’ll need to work on stamina in the later rounds to move her game forward, but otherwise, she is continuing her campaign towards an undisputed crown for the 154-pound division.”

For all the praise on Jonas’ work, there were dissenting voices when it came to demoting Marshall in favor of fellow Brit superstar Jonas in the P4P ratings, with veteran women’s boxing scribe Thomas Gerbasi saying that “(Marshall) was in a very competitive fight with a fellow pound-for-pounder. That doesn’t deserve a drop. Jonas had a great year, but not enough to get into the P4P rankings.”

With Jonas’ new status as junior middleweight champion, Dicaire was demoted to No. 2 in favor of former Jonas foe Terri Harper, who now closes in on Jonas to start forcing a rematch of their spirited draw back in 2020.

“Terri Harper backed (Jonas) up two years ago, and Marie Eve Decaire accomplished the same on Saturday,” said columnist Mark Jones, anticipating what would be a very attractive rematch between the two, who have been at it on Twitter for a while now trying to provoke a second fight. “That doesn’t bode well when she fights bigger opponents like Claressa Shields or Mary Spencer, but (Jonas) and others have made the junior middleweight division respectable.”

With a new champion, the No. 5 position became vacant, and Scotland’s Hannah Rankin was welcomed back into the Top 5 to occupy this position with another unanimous vote.

Elsewhere, two separate fights that featured the participation of two pound-for-pound entrants ended up producing some movement in the mythical rating as well.

In the junior lightweight division, Delfine Persoon had an anticlimactic ending in a fight she was clearly dominating, when she punched her foe Ikram Kerwat while she was down, turning what was on its way to becoming a stoppage win into a no-contest.

In the strawweight division, Seniesa Estrada dominated a feisty and fearless Jazmin Villarino to defend her belt and cement her position as one of the best lower weight fighters of today – and on her way to becoming an all-time great.

The combination of results (Estrada surging and looking better and better with every fight, and Persoon failing to secure high-profile bouts or even looking good in pedestrian ones) led the panel to unanimously decide that a swap between their positions would be a good idea.

Thus, Estrada moved up to No. 6 while Persoon dropped to No. 7.

Even those who pointed out at the caveat implied in Persoon’s action were in favor of the move.

“Ikram Kerwat had no business in the ring with an all-time great like Delfine Persoon,” said Jones, “so the fact that she was knocked out wasn’t a surprise. The punch Persoon landed on Kerwat while she was down was thrown in the heat of the fight, so the “no contest” call was proper. Jazmin Villarino wass an easy mark for Estrada, but she gave a spirited effort and is far superior to Kerwat.”

Japan’s Yuriko Miyata was the sole voice of dissent when she said that “though (Estrada) showed her talent as always, I don’t think it was a fight to raise her higher in P4P.”