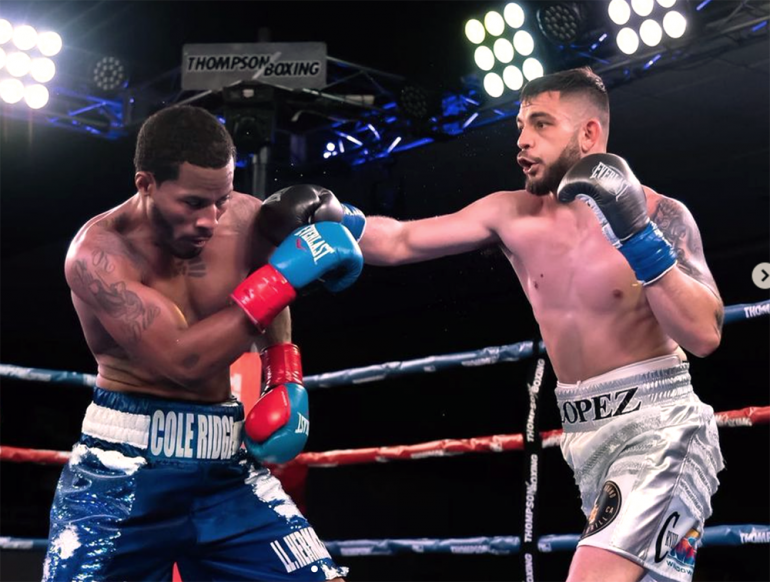 Louie Lopez Jr. is looking to continue his winning streak since suffering the first loss of his pro career.

Lopez will face unbeaten Adrian Gutierrez tonight at the Doubletree Hotel in Ontario, California. The eight-round welterweight bout will headline a five-bout “Path to Glory” card that will stream live on the Thompson Boxing Promotions Facebook and YouTube pages, as well as ThompsonBoxing.com (11 p.m. ET/ 8 p.m. PT).

Lopez (12-1-1, 4 knockouts), who resides in nearby Corona, last fought on August 20, defeating Elias Diaz by unanimous decision in a close and competitive fight. Like Gutierrez, Diaz entered the Lopez fight unbeaten and is a San Diego-area resident.

The 26-year-old Lopez has won his last four bouts since losing to then-unbeaten Saul Bustos in September 2020. Another win tonight could solidify Lopez’s position as a legit prospect at 147 pounds.

“Gutierrez is a really good fighter,” said Lopez earlier this week. “I am not blown away by his record, but I know mentally he is coming to win and sees this as a big opportunity. He has never lost, and I have. So in some ways, he has an advantage in that regard, but I will show I am the vastly better fighter. I look at fighters like Daniel Roman and Timothy Bradley; Thompson Boxing had them fight tough opponents so they could be ready for step-up fights. I want to be the next great fighter for this promotion, and in order to do that, I have to beat good fighters.

“I want to be taken seriously. I want to get into big fights. A loss really derailed my career in some sense, but the comeback has been fulfilling. It also made me a better fighter, so I’m grateful for the learning experience. But it has been very taxing mentally, physically and emotionally. A win here continues my march toward the top of the division, as I know who I am, but I must demonstrate it to the world. [Tonight], I am ready to set 2023 with a massive win.”

Tonight will mark Lopez’s sixth fight against an unbeaten fighter since turning pro in February 2018.

Gutierrez (12-0-1, 6 KOs) knocked out Daijohn Gonzalez in the second round of his last bout on August 27. The 27-year-old has won his last six bouts since fighting to a majority draw against Lennard Davis in September 2018.

In the co-feature, Manuel Flores of Coachella, California, will square off against Mexico City’s Armando Hernandez Torres (26-22, 19 KOs) in an eight-round bantamweight bout.

Ioannis Manouilidis (3-0), who is originally from Athens, Greece, and now resides in Los Angeles, will face Guadalajara’s Erick Garcia Benitez (3-3, 1 KO) in a four-round lightweight bout.

Hard-hitting middleweight Nelson Oliva (4-0, 4 KOs), who also resides in Los Angeles, will square off against Iowa’s Mike Plazola (2-2, 1 KO) in a four-round bout.