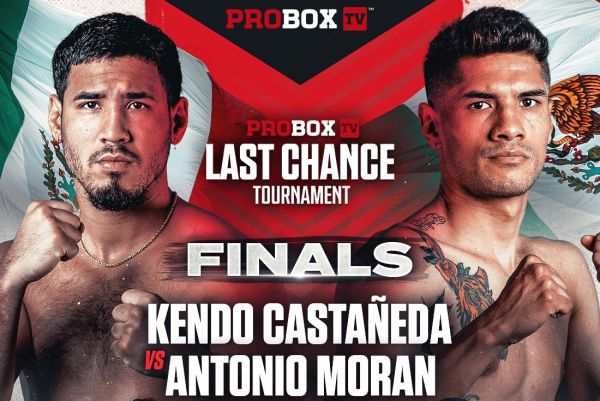 Moran improves to 29-5-1, 20 knockouts, and was the winner of the eight-man ProBox TV “Last Chance” tournament.

From the opening bell, the taller Moran was the more effective fighter, working behind a consistent jab and landing combinations. Moran also varied his offense, connecting with lead right hands to the head and left hooks to Castaneda’s body.

Castaneda attempted to initiate exchanges but would get countered by Moran. As the fight progressed into the middle rounds, Castaneda fought in spurts, at times connecting with left hooks to the head.

Moran scored a knockdown late in the sixth round. A left hook to the body backed Castaneda against the ropes and, moments later, a right to the stomach dropped him to one knee. Castaneda beat the count but was saved by the bell.

Undaunted, Castaneda rallied in the seventh round but was hurt toward the end of the round from a counter left hook upstairs.

Castaneda looked worse for wear but showed heart as the fight entered the final stanzas. Early in the 10th round, a barrage of punches dropped Castaneda to one knee. Castaneda beat the count but went down again to one knee to avoid the onslaught of punches. Referee Emil Lombardi saw enough and waved the fight off at 1:28.

Moran, who has been a staple of “Boxeo Telemundo” cards in recent years, defeated Jeffrey Torres and Michael Dutchover to reach the final. Castaneda earned the right to face Moran by knocking out Sonny Fredrickson and decisioning Joseph Fernandez.

“We prepared for a tough fight and the result is here with this trophy,” said Moran, who is promoted by Tuto Zabala Jr. and accepted the $50,000 cash prize after the victory Friday night. “I had to maintain my distance and outbox him. I didn’t want to let him within my guard because he would catch me with lead left hooks to the head when I dropped my hands.

“The money will make for a great Christmas for my family. I will rest for two to three weeks and then return to the gym and see what will be next for 2023.”

In the co-feature, hard-hitting lightweight Miguel Madueno broke down Juan Huertas en route to a knockout win in Round 5.

Madueno, who is originally from Guasave, Mexico, and now resides in Orange, California, improves to 28-1, 26 KOs.

The 24-year-old, who was coming off his first loss at the hands of Jezzrel Corrales on March 12, was too strong for Huertas, a 2012 Olympian. Madueno walked down Huertas, who fought off his back foot as the bout progressed.

In lightweight action, Ezequiel Borrero, of Las Vegas, remained unbeaten and improved to 6-0, 2 KOs, by defeating Puerto Rico’s Carlos Rosario (5-1, 3 KOs) by unanimous decision. Scores were 60-54 twice and 59-54 for Borrero.

In the opening bout of the ProBox TV card, junior lightweight Dominic Valle, of nearby Lutz, defeated Mexico’s Jose Meza (8-8, 2 KOs) by unanimous decision. Scores were 59-55 twice and 58-56 for Valle, who improves to 5-0, 4 KOs.

Francisco A. Salazar has written for The Ring since October 2013 and has covered boxing in Southern California and abroad since 2000. Francisco also covers boxing for the Ventura County (California) Star newspaper. He can be reached at santi[email protected]