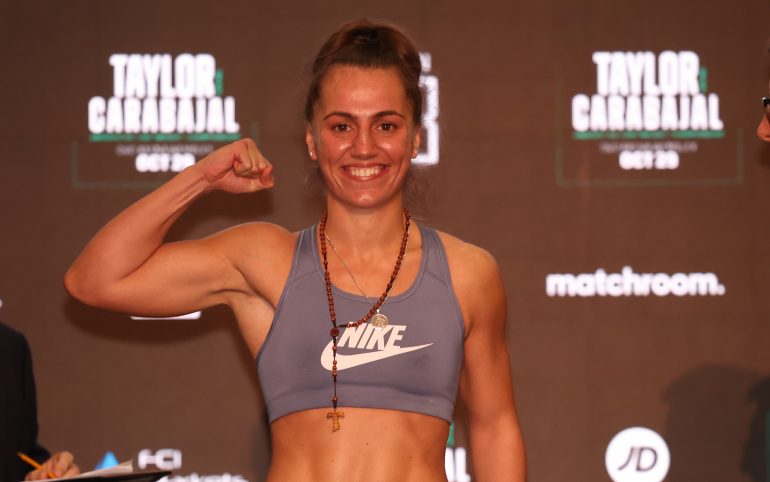 Another eventful week in women’s boxing has given us a handful of terrific fights, but only a few (if any) of them have made a big enough impression in our panelists to generate any movements in our ratings.

First up, one of the game’s living legends saw action last Saturday when the great Katie Taylor dismantled an unbeaten young challenger in Karen Carabajal over 10 rounds in another defense of her Ring lightweight title. And even though her performance was not enough for Taylor to regain the pound-for-pound crown, she definitely demonstrated why she is still one of the game’s best practitioners.

“I loved her attitude in the ring,” said historian Malissa Smith about the Irish all-time great. “It seemed to me that she was the most relaxed I’ve seen her and if possible, that she’d improved her game a little since fighting Amanda Serrano.”

A few pounds below in the weight chart, a couple of fights in the junior featherweight took place. In the most important one, Yamileth Mercado defended her WBC belt against the legendary Mariana Juarez in what ended up being a hard-fought, at times dirty grudge match. On paper, the win could have propelled current No. 2 Mercado to the top position, but the panel wasn’t convinced.

“It was a draw in my opinion,” said Argentine writer Yesica Palmetta, arguing that Mercado rallied in the last four rounds to leave a better impression on the judges’ mind even though she lost the first six rounds. Japan’s Yuriko Miyata said that “even though she won over a legend clearly, her performance seemed not to be quite the top of the division,” in dissent with columnist Mark Jones who argued that “Mercado’s game is greater than the sum of its parts. She’s an effective mauler. If she were to fight Lefebvre, she’d go right through her.”

Thus, Mercado remained at No. 2, but in the second most important fight in the division, Ellie Scotney improved to 6-0 with a win over Mary Romero, and her performance was convincing enough for the panel to promote her into the top 5 in the division at the expense of current No. 5 Juliana Basualdo.

“Scotney put on a terrific display defeating Mary Romero (…), and shows real talent and strength in the ring,” argued Smith, while Rincon Rojo magazine editor Irene Deserti said that “she has had good opponents in her last fights and deserves a place in the ratings.”

In the flyweight division, Arely Muciño wrestled the IBF belt from long-time titleholder Leonela Yudica, but the winner’s performance was less than convincing, and it didn’t lead to any changes in the ratings at 112 pounds.

“I must say I saw Yudica win,” said Deserti, who lives in Argentina (just like Yudica) but has previously lived and worked in Mexico (where Muciño hails from). “The fight was very even and I think that what tipped the balance in favor of the Mexican was her constant attack (although many times it did not pay off well, with Yudica’s counterattack being more effective).”

Although Deserti did propose to move Muciño past Alaniz in the ratings, she was overruled by many of her peers.

“Although she lost the last two rounds, Yudica did enough earlier in the fight to keep her title via a draw or decision,” said Jones, while Miyata argued that “her win over Yudica was fair, though. Yudica’s accurate counter punches worked well, especially later in the fight, but Muciño’s attack was consistent, and had good volume to persuade the judges.”