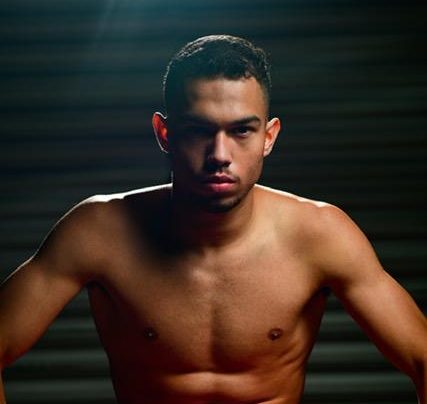 ONTARIO, Calif. – Junior welterweight prospect Ernesto Mercado is ready to graduate to the next level of professional boxing. A knockout win over a former world-class veteran is a step in the right direction.

After a slow start, Mercado broke down former featherweight/junior lightweight contender Jayson Velez, earning the knockout win after the sixth round Saturday night before a partisan crowd at the LumColor Center.

Mercado, who resides in nearby Pomona, improves to 8-0, 8 knockouts.

Velez was a significant step-up in opposition for Mercado, who had not gone past the second round in his previous fights. Velez came to fight as he was able to occasional slip a straight right hand to the head and utilized lateral movement that made it difficult for Mercado to land anything flush early on.

“He was a lot tougher than I expected,” Mercado told The Ring after the fight. “I felt he was trying to come forward so he could gas me out because I don’t have that much experience in the pros yet. Maybe he thought he could gas me out in the later rounds. His toughness stood out to me.

“Anytime I shot the jab, I would land it flush. I think those were the biggest shots that were landing that started to affect him.”

By the fourth round, Mercado began to get his timing down, connecting with lead and counter left hooks to the head of Velez. As the fight progressed into the second half, Mercado’s punches began to take a toll on Velez, who’s punch output dropped with each passing moment.

The 20-year-old Mercado was satisfied with the result, but felt he could learn more from his performance.

At the end of the sixth round, Velez’s corner told referee Ivan Guillermo to stop the fight, saving Velez from taking further punishment. Immediately afterwards, Velez walked across the ring and embraced Mercado.

“I knew I was going to get the knockout. Maybe I rushed it a little too soon and I was trying hard sometimes. I felt if I let it flow and listened to my corner more, I would’ve stopped him in spectacular fashion.

“I want to make a lot of noise in the 135 or 140-pound divisions. I could fight at any weight. If the right opportunity comes for me to fight at 135 pounds, then I’ll do it. There’s a lot of great names.”

Velez, who resides in Juncos, Puerto Rico, drops to 30-10-1, 21 KOs. The 34-year-old fought for several years on Golden Boy Promotions cards and has now lost five of his last six bouts.

In the main event, middleweight Raul Lizarraga of San Diego improved to 10-0, 10 KOs by stopping Mississippi’s Tyi Edmunds (14-5 1 ND, 9 KOs) in the third round.

Lizarraga broke down Edmunds, landing thudding punches to the head and body. After an accumulation of punches, Edmunds’ corner threw in the towel, prompting referee Ray Corona to stop the fight at 1:30.

Jack May (5-0, 4 KOs), a 6’8” heavyweight who resides in nearby Chino Hills, dropped Adrian Miles (0-4-1) of Mississippi three times en route to a knockout win in round one. Referee Ivan Guillermo waved the fight off at 2:09.

In cruiserweight action, Jaime Cerna of nearby Rancho Cucamonga improved to 2-0, 1 KO by stopping Neil Muricio Cannon (0-2) at 48 seconds of the opening round.

In the opening bout of the Red Promotions card, flyweight Agnesa Kirakosian stopped Mexico’s Esil Cervantes (0-2) at 1:07 of the fourth round. Kirakosian, who is originally from Armenia and now resides in the Los Angeles suburb of Sun Valley, improves to 6-0, 5 KOs.

Saturday night marked the debut of the Brut Boxing series. Next card is penciled to take place sometime in December.