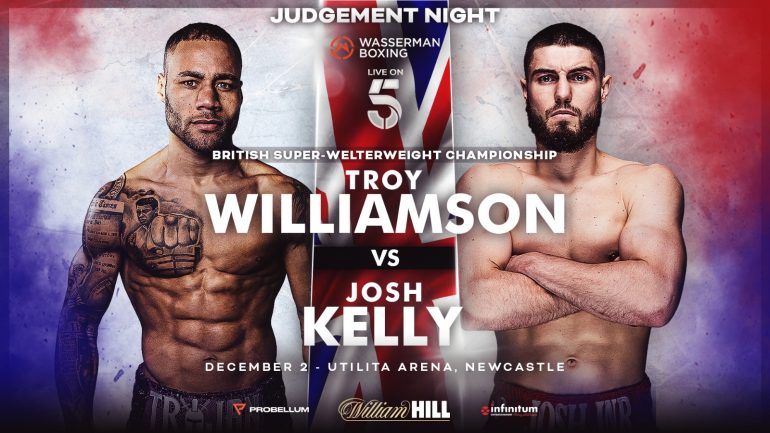 It’s title time on the Tyne, with the epic North-East battle for the British Super Welterweight Championship confirmed between Darlington’s Troy Williamson (19-0-1, 14KOs) and Sunderland’s Josh Kelly (12-1-1, 7 KOs) at the Utilita Arena, Newcastle on Friday December 2, live on Channel 5.

Kelly expressed his desire to compete for Williamson’s Lonsdale belt as the two came face-to-face in July after ‘PBK’ beat Lucas Bastida to claim the WBO International Super Welterweight Title on July 30 at Newcastle’s Vertu Arena.

With the champion equally keen to get the fight on, Williamson since added a win of his own to his undefeated record as he stopped David Benitez in the sixth round on September 17 at the University of Bolton Stadium live on Channel 5.

“We’re two fighters flying the flag for the North East, but only one of us holds that British title,” said Williamson. “Every fight is going to be a tough fight at this level, especially when belts are on the line.

“I’m the champ, I’m undefeated, and I don’t think there’s anything he can throw at me that’ll stop my reign as Super Welterweight king as I move on to bigger and better things. One thing is for sure, and that’s fireworks.”

“This is set to be one of the North-East’s biggest fights in recent memory, and you can see exactly why,” said Kelly.

“Troy is British Champion for a reason and he’s obviously a good fighter. However, he’s just another obstacle in the way of me achieving what I’m destined to achieve, and he’ll be taken care of on December 2.”

After producing a stoppage win over Ted Cheeseman to become the British Champion in October of last year, Williamson has since defended his title against Mason Cartwright to set up this hugely anticipated clash against Kelly.

“The last time we ventured to the North-East, the people clearly showed their passion and love for boxing,” said Wasserman’s Head of Global Boxing, Kalle Sauerland.

“This time it is on another level as we bring one of the most hotly anticipated domestic dust-ups available. Two of the North-East’s own battling it out to boast the title of Britain’s best. Newcastle is about to host one of its biggest nights in the sport, and I cannot wait to be in the arena for an electric atmosphere come fight night.”

Williamson vs Kelly for the British Super Welterweight Championship tops a huge night of boxing in the North-East on Friday December 2 at the Utilita Arena, Newcastle with more major fights to be announced soon. Promoted by Wasserman Boxing in association with William Hill and Infinitum Entertainment, all the action will be shown live and free on Channel 5.