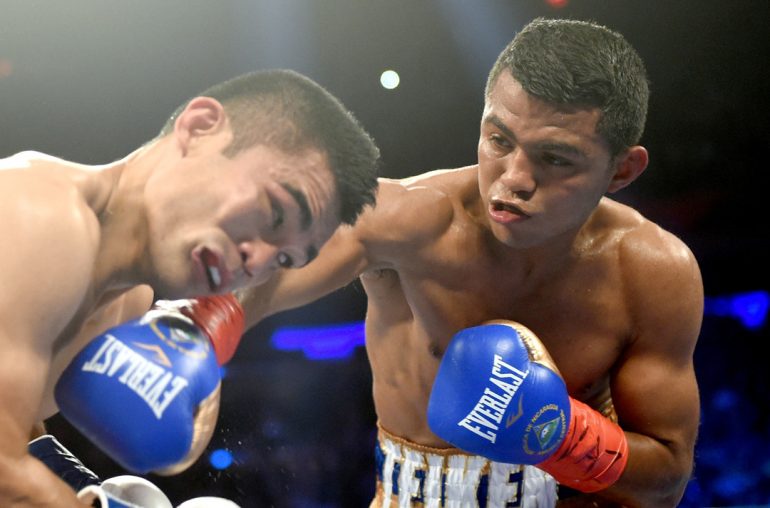 Chocolatito lands a right cross to Brian Viloria. Photo by Naoki Fukuda
17
Oct
by The Ring

On Oct. 17, 2015, Roman Gonzalez scored a ninth-round stoppage over Brian Viloria to retain Ring and WBC flyweight titles at Madison Square Garden in New York. The official time was 2:53.

With Floyd Mayweather having retired one month earlier, Gonzalez, then a three-weight world titleholder, was anointed as the new pound for pound king. He was unbeaten in 43 fights, and HBO were now onboard to broadcast this diminutive Nicaraguan master.

Viloria was a terrific opponent and a former two-weight world champion himself. The Hawaiian-born boxer-puncher had only lost one fight in five years – a 12-round split decision to Juan Francisco Estrada – and he’d never been off his feet.

Until he met Gonzalez.

Chocolatito decked Viloria with a laser-bolt right hand in Round 3 and never let up. The champion more than matched Viloria up-close; thumping home short, controlled bursts, and Gonzalez also picked his punches perfectly at distance.

The gutsy Viloria slotted home a terrific body shot in the ninth but that only seemed to anger Gonzalez, who went through the gears in stunning style. Referee Benjy Esteves waved the bout off with Viloria reeling from a blistering sequence of combination punching.

“Brian is a great champion but tonight I was the better man,” said Gonzalez afterwards.