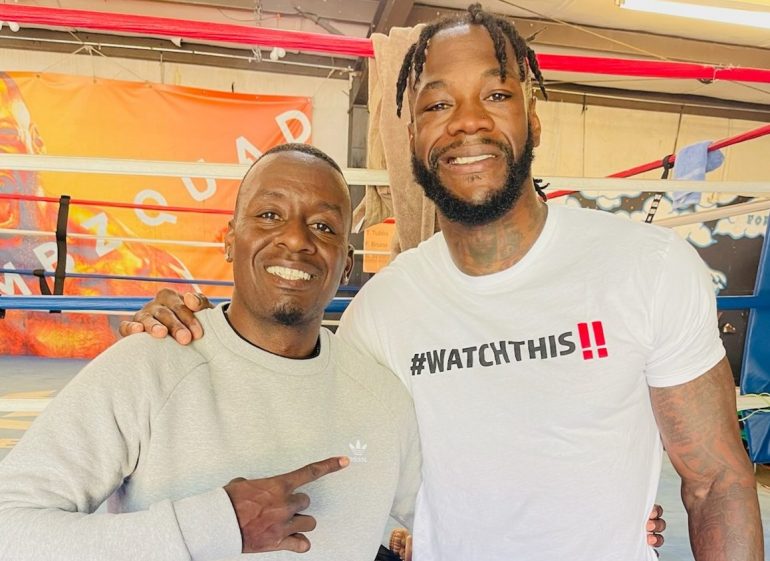 We always see the finished product. We hardly ever see what goes into making it.

For world-class fighters, the days of a team consisting of just a trainer and his fighter are long gone. So, too, are the days of the processional entourage of do-nothings that linger when a fighter is on top.

Today, almost every member of a team carries a responsibility—often times an impactful one.

When Joey Scott, 44, first met Deontay Wilder he was a tall, skinny kid sitting on a ring apron in Jay Deas’ Skyy Boxing Gym in Tuscaloosa, Alabama. Scott, a track star at the University of Oklahoma with a degree in criminal justice and communications, was conditioning a handful of athletes.

Now he works with the fastest man in the world and possibly the most powerful.

“Deontay doesn’t just hire anyone, he hires only people he trusts, and I wasn’t about to stand there and blow a whistle,” said Scott, the coach of currently the fastest man in the world, sprinter Fred Kerley. “When I started out, I wanted to be the best. When Deontay started out, he wanted to be best. Deontay needs to believe in what he is doing.

“He makes my job easier because Deontay commits to be the best. Deontay and I got into this game than we’re more than what people see on the outside. I believe I’m the best strength-and-conditioning coach in basketball, track and boxing.

“Deontay and I wanted to prove to ourselves that we are more than what meets the eye. It’s one thing that you can’t team and that’s heart and belief in yourself. I have it. Deontay certainly has it. Deontay is a Hall of Famer and he still has more to do.”

After college, Scott signed as a professional runner from 2001 to 2007. To make ends meet, he maintained a side job when he did not have a track meet with Mercedes Benz in Fort Worth, Texas, doing everything from administrative work to duties in the mailroom.

Scott, from the hardcore Stop Six section of Fort Worth, is the second of four boys. At one time, Fort Worth was nicknamed, “Murder Worth,” and was one of the murder capitals of the United States. His father, Nicholson Scott, was a track athlete himself knew how to keep his sons occupied in positive ways.

“What I love about Deontay is he’s always evolving, and he’s learned so much about himself since his last fight (Wilder’s courageous 11th-round stoppage loss to Tyson Fury last October),” said Scott, who owns Tru Fit Athletics, based in Miami, Florida. “I train 18 Olympians. Only three are Americans. Everyone else comes from another country. I have their careers in my hands. With Deontay, I have his life in my hands.

“It’s why I take my training and conditioning with Deontay very seriously. People are going to see a new, different, improved Deontay Wilder on Saturday night. He’s having fun again. He always trained hard, but what I like is that Deontay is enjoying himself again.

“This is Deontay’s second reign. He’s enjoying everything that he’s putting into it. He’s in tuned to his mind, body and soul.”