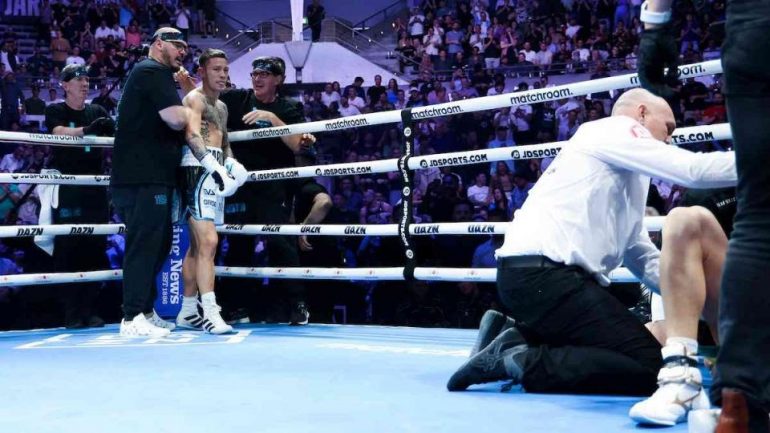 Paro, a skilled southpaw, uncorked a huge left hook on the chin that dropped Jarvis down and out. Jarvis tried to clamber back to his feet but he couldn’t make it and the fight was waved off.

Jeff Fenech-trained Jarvis falls to 20-1 (18), and might have just been caught cold, but it was Paro’s night.

“I knew I was the best in this country, I’ve said it for a while,” said Para. “I’m pumped. I’m lost for words at the moment, but I’m here to make a statement at the 140-pound division. There was a lot riding on this fight and I’ve shut a few mouths.”

Australian heavyweight contender Demsey McKean stayed in the hunt for a big fight with an entertaining if untidy three-round win over Patrick Korte.

Korte picked up a warning when he failed to stop punching in a clinch after the referee called ‘break’ and he was badly cut by the right eye in a rough opening round.

The heavyweights came out bombing again in round two, southpaw McKean was having success with his left uppercut and Korte tried to bull his way in. Korte was down from a shove in the second in a messy but still interesting contest.

McKean started to score to the body in the third but tough Korte kept coming forwards, even as he started to look increasingly weary. However, Korte was overwhelmed by several rights and lefts and tumbled to the floor. With Korte’s tank running low, the towel came in to save Korte from further punishment.

Talk is that McKean could land a big Australia fight with Anthony Joshua or Dillian Whyte next.

Stylish southpaw Skye Nicholson won the first title of her pro career, claiming the vacant Commonwealth featherweight title with a 10-round decision over Krystina Jacobs.

Jacobs was down in the fourth from a short right hook and had to hold on as the round closed, but Nicholson was poised and composed, cruising through the gears in the fifth and the gulf in class widened further still.

It was steady work for Nicholson, who impressed as she moved to 5-0.

Evans, making his debut, was dropped to the body in round five and his left eye began to close. The wound split open in the sixth and Evans survived a doctor’s inspection as the blood poured.

Flashy Tait, who had been open to shots earlier in the fight, was firmly in the ascendancy and Evans was not allowed out for the seventh.