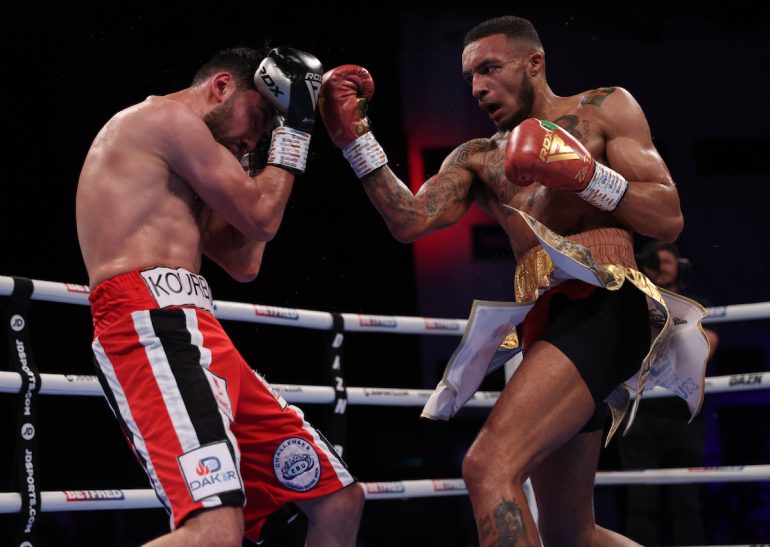 Barrett, right, is looking to box clever against Rakhimov
14
Oct
by Francisco Salazar

The 12-round bout will take place at Etihad Arena, in Abu Dhabi, United Arab Emirates, and will precede the main event between WBA light heavyweight titleholder Dmitry Bivol and mandatory challenger Gilberto Ramirez.

Joe Cordina was set to make the first defense of the IBF title but the Welsh fighter suffered a hand injury that required surgery and was subsequently stripped of the title by the IBF. Cordina had won the title by knocking out Japan’s Kenichi Ogawa on June 4.

“Shavkatdzhon Rakhimov against Zelfa Barrett for the vacant IBF junior lightweight world title is another 50-50 fight for Abu Dhabi’s new ‘Champion Series’,” said Matchroom Boxing Chairman Eddie Hearn. “Rakhimov is a very good fighter. He’s already fought for the IBF world title. Zelfa is a guy who’s earned his shot. He fought an IBF eliminator [against Bruno] Tarimo and he’s ready to go. This is a massive opportunity for him in neutral territory on a huge show to go and change his life.

“Zelfa Barrett as world champion against Joe Cordina coming back to try and regain his world championship is a massive fight for British boxing. Joe will be really down and frustrated at the moment but he will get that world title shot as soon as he resumes his career. Hopefully that will be against Zelfa Barrett and we’ll get a massive all-British fight.”

Rakhimov (16-0-1, 13 knockouts), who is originally from Bokhtar, Tajikistan, and now resides in Los Angeles, California, most recently fought on December 11, stopping Sardor Muzaffarov in the second round in a stay-busy fight. The win over Muzaffarov took place about 10 months after Rakhimov fought to a majority draw against Joseph “Jo Jo” Diaz, who was stripped of the IBF title after missing weight the day before.

The 28-year-old is managed by Egis Klimas and is ranked No.3 by The Ring at 130 pounds.

Barrett (28-1, 16 KOs), who resides in Manchester, England, defeated Faroukh Kourbanov by unanimous decision in his most recent bout on June 4. Barrett has a notable victory over Kiko Martinez on February 13 of last year.

Also fighting on the Matchroom Boxing card is Galal’s older brother Kal Yafai (26-1, 15 KOs), whom has not fought since losing by stoppage to Roman “Chocolatito” Gonzalez in February 2020.