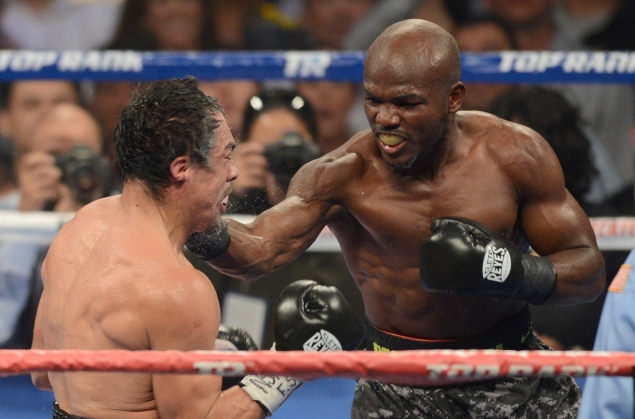 Photo by Ethan Miller/ Getty Images
12
Oct
by The Ring

It was the night of Desert Storm’s life.

On October 12, 2013, Tim Bradley retained his WBO welterweight title with a 12-round split decision over the legendary Juan Manuel Marquez at the Thomas & Mack Center in Las Vegas. One judge scored the bout 115-113 for Marquez but was overruled by tallies of 116-112 and 115-113 for the champion.

Bradley, an unbeaten two-weight world titleholder, was coming off the hardest fight of his career. In March 2013, the Palm Springs-born technician survived a brutal final-round assault and knockdown to claim a points decision over the rampaging Ruslan Provodnikov. The punishment Bradley absorbed stayed with him for months.

Marquez, meanwhile, was coming off a sensational sixth-round knockout win over long-time nemesis Manny Pacquiao in December 2012. While Bradley had once claimed a highly contentious decision over the Filipino superstar, Marquez’s win was as conclusive as it gets. Pacquiao was literally knocked out cold.

Bradley’s movement, speed and variety of attack confounded Marquez for long periods. Despite being recognized as one of the finest counterpunchers in world boxing, the Mexican warrior was unable to find the crunching shot that sent Pacquiao into dreamland 10 months earlier. Marquez had success in the fight, but Bradley’s ring generalship and consistency carried the day.

“I knew Marquez wouldn’t abandon his base and balance for offense; he’s a guy that likes to be set and a guy that likes to punch hard,” Bradley told The Ring years later. “I knew I had to pick up my feet, keep moving. I knew I was quicker than he was. I had to counter the counters. Guys at the higher level, they tend to look to counter just about every single punch. I knew Marquez was a great counterpuncher. I would start the action, he would come back, and then I had to finish the action. And then I move, he has to pick up his feet, reset before he punches. I knew I had the advantage. I played the cat and mouse game with him. It was a really easy night for me. I always tell people: No disrespect to Marquez, [but] that was the easiest $4 million I ever made in my life.”