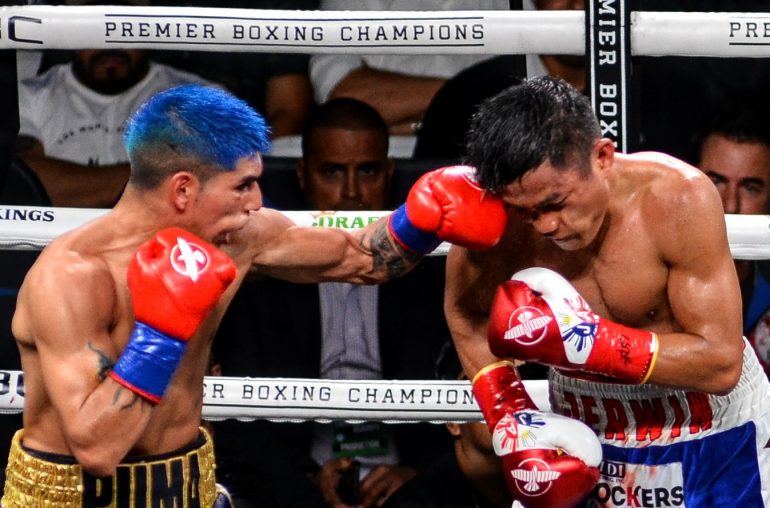 Saturday’s clash between Martinez and Ancajas was a rematch of their February 26 bout, which Martinez won by unanimous decision. In that fight, Ancajas looked sluggish throughout much of the bout as the shorter Martinez outhustled and outboxed Ancajas.

Ancajas had a solid start in the rematch between two fighters ranked in the top 10 by The Ring. Martinez and Ancajas are ranked No. 4 and 6, respectively. Martinez would press forward, but Ancajas was the more-accurate puncher, connecting with an array of combinations to the head of Martinez. A two-punch combination, culminating with an uppercut to the head of Martinez, was the highlight of round two for Ancajas.

Midway through the fourth round, a combination by Martinez momentarily stunned Ancajas. Towards the end of the round, Martinez backed up Ancajas with another series of punches to the head, but was not able to follow up as the bell sounded to end the round.

The ebb and flow continued into the fifth round. Towards the end of the round, Ancajas connected with a solid counter right hand to the head. Undaunted, Martinez charged at Ancajas in hopes of landing a significant punch before the end of the round.

Both fighters traded lead hooks and crosses during the sixth round, but Martinez’s punches seemed to do more damage than those from Ancajas’, especially during the final moments of the round. Martinez attempted to catch Ancajas from the onset of the seventh round, but took a counter right cross to the head.

Even as the pace of the fight slowed, Ancajas did well throwing and connecting shorter and straight punches, but Martinez continued to be effective throwing and landing lead right crosses and left hooks to Ancajas’ head.

Ancajas was able to land two left crosses to Martinez’s head. As he did earlier in the fight, Martinez again charged at Ancajas, hoping to retaliate and connect with vicious punches to the head.

Ancajas looked worse for wear during the final round, but fought on and was able to finish the fight on his feet, despite Martinez looking to land one big punch flush to the head in hopes of knocking out Ancajas.

Martinez is looking to face any fighter at 115 pounds after two convincing victories over Ancajas.

“(Tonight) was validation from the first fight,” said Martinez, who is promoted by Marcos Maidana. “I trained very hard for this fight.”