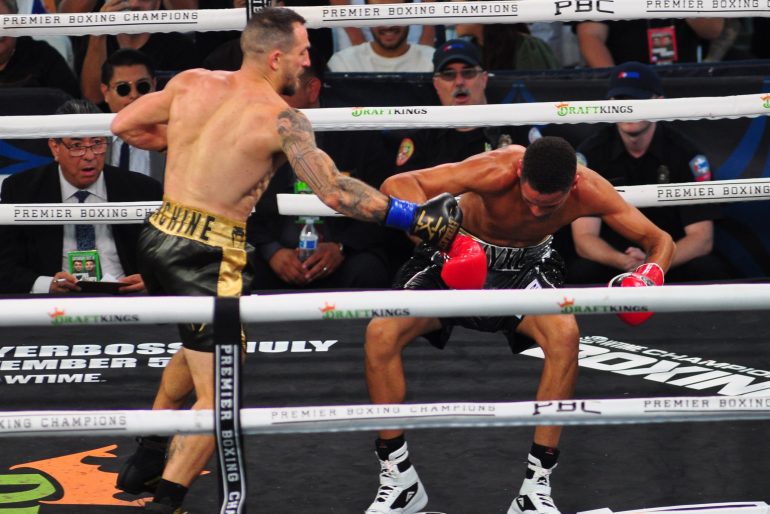 The taller Fox was able to work from distance, but Kavaliauskas, who is originally from Kaunas, Lithuania and now resides in Camarillo, California, closed the distance between the two and unleashed vicious hooks and crosses to the head of Fox.

With friend and stablemate Vasiliy Lomachenko sitting ringside, Kavaliauskas continued to dictate and control the action. Fox looked to find openings, but was put on the defensive as Kavaliauskas would unleash a combination to the head and body.

To his credit, Fox continued to fight on. Kavaliauskas almost scored a knockdown in the final round, but Fox was able to make it to the final bell.

Fox, who resides in Upper Marlboro, Maryland, drops to 22-4, 5 KOs. He has now lost his last three bouts.

Prior to the Kavaliauskas fight, the 26-year-old had not fought since August 7 of last year, losing a controversial unanimous decision to Gabriel Maestre of Venezuela, in a fight most ringside observers thought Fox won convincingly. The public outcry forced the WBA to begin consolidating all its world titleholders in each division.

The fight between once-beaten prospects was even early on, but Vazquez, who resides in Fort Worth, Texas, displayed a more-consistent and effective skill-set during the fight.

The action was fought in close quarters throughout much of the fight. The southpaw Slavinskyi worked behind a consistent jab, following it up with straight left hands or left crosses to the body.

During the middle rounds, Vazquez was able to outbox Slavinskyi, utilizing lateral movement and countering to the head and body of Vazquez. The pace of the fight slowed considerably by the seventh round, which favored Vazquez. Slavinskyi pressed forward, but Vazquez continued to outbox from outside.

Vazquez is coming off a unanimous decision victory over Jose Argel in his last bout on July 9. The fight took place over five months after Vazquez lost a close split-decision to Raymond Ford.

Slavinskyi, who is originally from Ukraine and now resides in Los Angeles, drops to 13-2-1, 6 KOs. He has lost his last two fights.