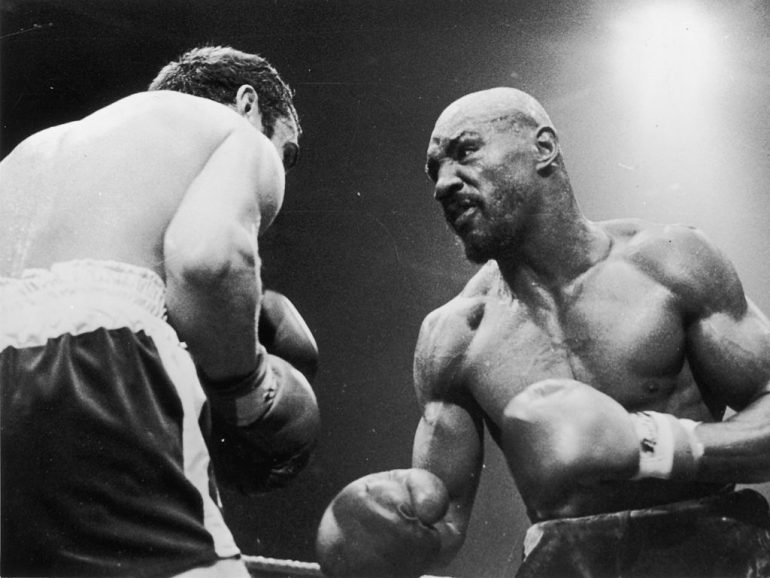 Hagler on his way to winning the undisputed middleweight crown on September 27, 1980. Photo by Keystone/Hulton Archive/Getty Images
27
Sep
by The Ring

It was a massacre.

On Sept. 27, 1980, Marvelous Marvin Hagler finally reached the top of the middleweight mountain when he wrenched the undisputed championship from Britain’s Alan Minter via third-round stoppage at Wembley Stadium in London. The official time was 1:45.

Almost one year earlier, Hagler was deemed very unlucky not to have won the crown from then-champion Vito Antuofermo, who retained on a 15-round split decision draw in Las Vegas. Hagler had brought a 45-2-1 record into his first world title bout and was bitterly disappointed with the result.

Minter won a close decision over Antuofermo to lift the title in March 1980 and followed up three months later with an eight-round stoppage in a direct rematch.

Next up for the Sussex-based champion was Hagler.

The all-southpaw collision was marred by racial overtones – injected into the buildup by Minter – and the atmosphere was poisonous before the opening bell.

Minter elected to fight fire with fire and refused to switch up the tactics when he came off second best. Hagler scored frequently with head shots and a pair of jolting right hooks sent blood spraying over ringsiders in the third.

The champion suffered several lacerations to his face, the worst of which was opened above his left eye. When referee Carlos Berrocal allowed Minter’s corner to inspect the damage, they wisely pulled their man out of the fight.

When Hagler was confirmed as the new champion, angry members of the London crowd attempted to pelt him with bottles and cans. Instead of being allowed to enjoy his moment, Hagler had to be escorted from the ring by police amid disgusting scenes.

So began one of the most memorable middleweight championship reigns in boxing history.