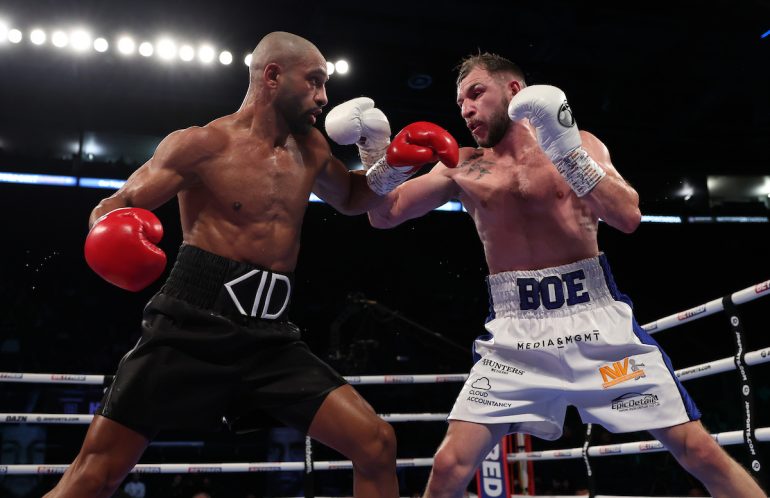 Kid Galahad v Maxi Hughes: their names, together on the card, sound retro, as if they were Depression-era fighters in some old lightweight bout of yore. Alas, with two counter-punchers pitted against one another there was little expectation that this would be a battle for the annals of boxing history.

“I was praying that I’d win. For me, I’m full of adrenaline, I don’t want to speak out of turn. I know I started slow, and I know it was probably close, but I just listen to my corner,” Hughes asked of the controversial decision.  “Tell you one thing: in 17 years of boxing, I’ve never been hit on the sides of the ribs. He’s a cheeky bugger for that. They were the tactics. But I just stay composed.”

As promoter Eddie Hearn says about Galahad: “He’s a tricky customer, a switch-hitter. This was a fight that divided opinion. I think it’s very close. Someone texted me saying Galahad won, someone texted me saying Maxi won. He rolled the dice, he came through it, even though he’s got a nasty cut. And now he can get that big American payday.”

Asked who he’d like most for his next fight, Hughes laughs: “Whoever pays the most money.”

Given the last-minute cancellation of the Leigh Wood-Mauricio Lara main event, the crowds hardly felt subdued – but they grew more-so as the fight wore on. Galahad (28-3, 17 KOs) in the black shorts and boots, and Maxi Hughes (26-5-2, 5 KOs) in white and blue, like good and bad guys of old, spent much of the fight clinching and colliding, tussling and holding. Twice the referee warned Galahad for headbutts, making for a stop-start fight where you can practically feel the frustrating rising like a miasma of humidity over the ring. In only the second round, a heckler close to the ring shouted accusations of cheating at Galahad.

Initially, Galahad, a switch-hitter with a flitting, defensive style, seemed the more composed of the pair, while his opponent Hughes – a southpaw – lurched forward with windmilling combinations, to varying degrees of success at landing them. Still, Hughes seemed he had more aggression and verve, and by Round 6 managed to put his combinations together to land some mean blows – if too few and far between for Galahad’s cutting jabs.

It was a messy affair, and not a totally edifying one, with the rhythm of the fight never quite coming together. If only the rest of the fight was a bit more like the start of the 11th: a lively beginning where both opened up on one another and Hughes gained a cut over his left eye, before reverting back to their more defensive crouches. It was a cagey evening for both men: neither wanted to risk another loss. Perhaps the biggest surprise of the evening was that the pair hugged at the end of the fight, though that was before the decision came through and Galahad – rather understandably – quickly exited the ring.

Galahad looked downtrodden as Hughes’ hand was raised, but for Hughes, his defeat of Galahad puts him on the line to make the fights at lightweight that he might only have dreamed of before. In a division overflowing with lively talent, such as Devin Haney, Vasiliy Lomachenko, Gervonta Davis and Ryan Davis, it’s a brave new world out there for Maxi Hughes.