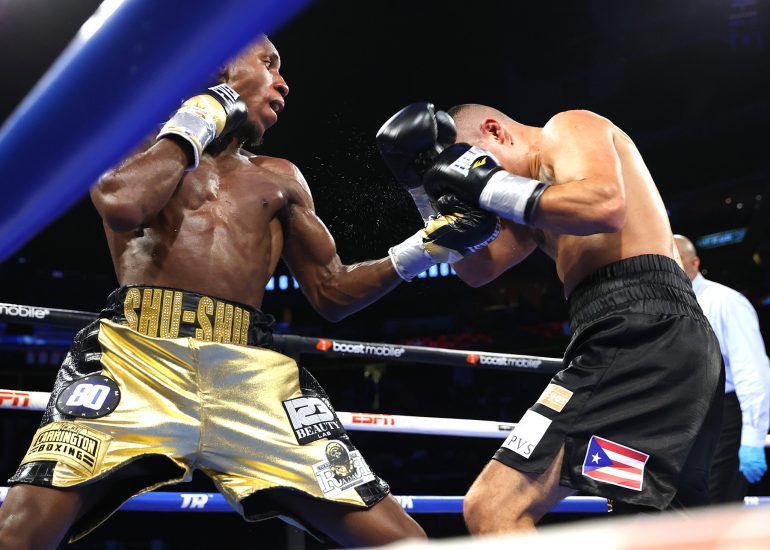 NEWARK, N.J. — Henry Lebron scored the most significant win of his young career so far, defeating Andy Vences by an eight round unanimous decision on Friday at Prudential Center in Newark, N.J.

The 25-year-old southpaw from Aguadilla, Puerto Rico earned the win by scores of 80-72, 79-73 and 78-74 in the junior lightweight bout, which was the final fight on the Shakur Stevenson-Robson Conceicao card before the ESPN broadcast began.

Lebron (17-0, 10 knockouts), who boxes in a fashion reminiscent of Sergio Martinez, leaning in with his right hand lowered to lure opponents for counters, used his right jab and counter hook to control the range against the aggressive Vences (23-4-1, 12 KOs) of San Jose, Calif.

Both fighters had to battle cuts due to head clashes, with Vences being cut on the corner of his right eye in the first, and Lebron sustaining a larger cut above his left eye brow in the second.

Lebron began to assert control of the fight in the second half, stunning Vences with a counter left hand and opening up combinations to the head and body in the sixth round.

Lebron separated himself more from Vences in the eighth, landing power punches with impunity. Lebron took his foot off the gas in the final 30 seconds, which enabled Vences to throw one last flurry in vain before the final bell.

Lebron is rated no. 9 by the WBO at 130 pounds. Vences, who had once been a rising prospect, has now lost four of his last five bouts.

Bruce Carrington put on a dazzling display of pinpoint punching, taking apart the determined but outgunned Jose Argel to a shutout six-round decision in their featherweight bout. “Shu Shu” Carrington (5-0, 3 KOs) took scores of 60-54 on all three cards in what was his first time going the distance since his pro debut a year ago.

The 25-year-old Carrington of Brooklyn, N.Y. was throwing punches like he wanted to end matters early, mixing up hooks and uppercuts with his left hand and ripping the body with both hands. He showed far greater punch selection and focus than most boxers with only a handful of pro fights.

Argel (9-5, 3 KOs) of Santiago, Chile showed a sturdy chin, but was spitting out blood from the second half of the fight on.

Carrington had won the U.S. Olympic trials in 2020 but didn’t get to compete in Tokyo due to the Americas Olympic boxing qualifier being canceled because of the COVID-19 pandemic.

Argel, 28, has only been stopped once, by Haven Brady Jr. earlier this year.

Misael Lopez took a significant step forward in his career course correction, outhustling Orlando Gonzalez in an 8-round welterweight bout between once beaten fighters. All three judges scored the bout in favor of the Jamel Herring-managed Lopez (14-1, 5 KOs) of Denver by way of Agua Prieta, Mexico, with scores of 79-73, 78-74 and 77-75.

Lopez, 26, register his third straight win since his sixth round stoppage loss to Jordan White in March of 2021. Gonzalez (18-2, 11 KOs) of Aguadilla, Puerto Rico had success with his southpaw style in spots but Lopez used angles in close to find the openings in his defense.

Gonzalez has now lost two of his last three, including a unanimous decision to former Olympic star Robeisy Ramirez in October of 2021.

Floyd Diaz (7-0, 2 KOs) overcame an early career test from a determined opponent, outfighting Juan Hernandez Martinez to a unanimous decision in their six-round junior featherweight bout. Both fighters were hurt in the bout, with Diaz of Las Vegas scoring a knockdown with a right hand to end the third, and Hernandez (2-2-1) of Gomez Palacio, Mexico stunning Diaz in the second and fifth rounds. Diaz, 19, closed the show strongly, hurting Hernandez with an uppercut and overhand right in the final stanza to solidify his victory.