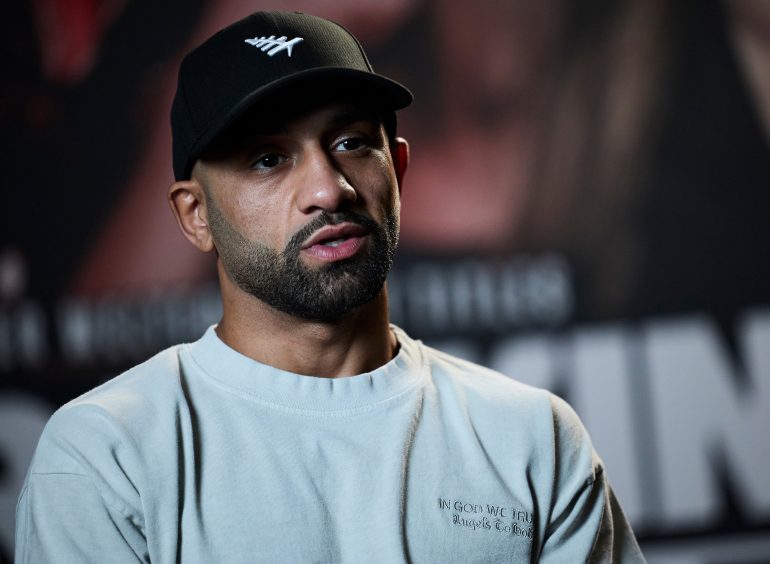 Lean, compact, and invariably solemn, Kid Galahad is not in a joking mood before his lightweight twelve-rounder with fellow South Yorkshire fighter Maxi Hughes.

And you can hardly blame him, after losing his IBF featherweight belt in his own Sheffield backyard to Spaniard Kiko Martinez in November of last year. It was a fight Galahad was mostly dominant in, until he took a spectacular right hand to the chin and a second at the top of the sixth round acquainted him with the canvas in walloping fashion.

“[Trainer] Brendan Ingle always told us to pick ourselves up and get on with things. I got knocked out, but what am I supposed to do, go back to my house and feel sorry for myself and cry? Of course I was devastated. I had a long think about it – but you can do that while you’re in the gym. We’ve adjusted.”

Galahad has now moved up two weight divisions under the guidance of trainer Dominic Ingle and his team (although he is still currently listed in The Ring’s featherweight ratings at No. 9), where the fighter says he feels far more comfortable.

“I think people don’t realize how big I was for 126. When you’re younger, you can get away with certain things and recover. The older you get, the bigger you get, and the harder it is to make weights. That’s why certain fighters move up,” Galahad says. “I probably should have moved up after the Jazza Dickens fight, but it’s hard when you’re getting large sums of money to defend the title, and I always wanted to defend the title.”

As Ingle mentions, Galahad needs to win this fight or risk a career nosedive. As he says, “I’m going to go in there and smash Maxi Hughes. If I get the stoppage or I don’t, I want to emotionally, physically break him down,” but he adds that the 25-5 Englishman is often underestimated. “His main strength is that he’s better than he looks, and he fights on fear. A fighter that fights on fear can be dangerous. It’s not gonna be a walk in the park with him. But I believe I beat him in every department.”

At their face-off this week, Maxi Hughes referred to Galahad as a “dirty fighter” who does a lot of stepping on his opponent’s toes, but Galahad seems to take the accusation in his stride. “Everyone’s entitled to their own opinion. If he’s that bothered about me stepping on his foot, when he fights me he can wear steel-toe boots instead of boxing boots. It’s nothing intentional. It’s a fight. We’re not going in there to tickle each other.”

As for topping the Nottingham card this weekend – an unexpected turn after the original main event, Wood v Lara, was canceled due to injury – Galahad is equally unbothered. “A fight is a fight for me – doesn’t matter if I’m top of the bill or bottom. My mindset is that you’re fighting for your life. Put me at the bottom of an Anthony Joshua bill and give me more money, and I’d be happier.”

It doesn’t appear that anything about Galahad’s unsmiling, focused demeanor in the lead-up to the fight is a performance. “I’m not here to make friends. In this game, no really is your friend – I understand that, but [Maxi] might not. At the minute, he’s had a good little run, so he might think some people are his friends. After Saturday night, he’s going to realize that no one was really his friend.”