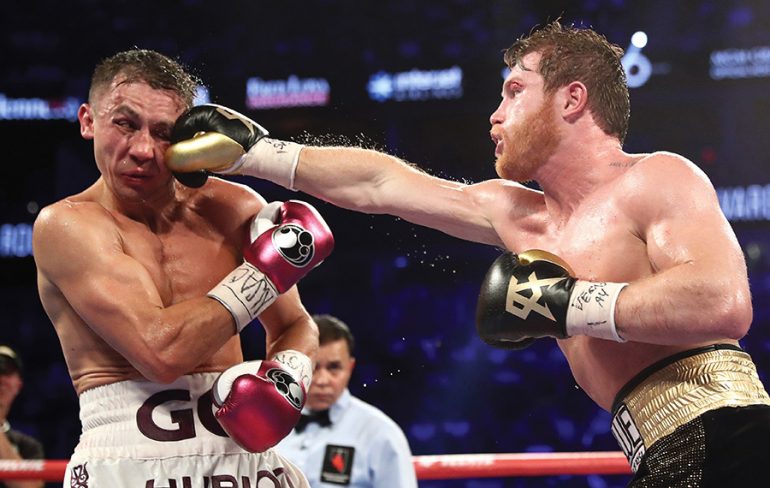 It was razor-close, but the judges found a winner.

Both men had faced off at the very same venue one year earlier. The consensus that night was that Golovkin did more than enough to win, but Canelo escaped with a 12-round split decision draw. Incredibly, judge Adalaide Byrd scored the bout 118-110 (10 rounds to two) to Canelo and forever marked herself as a boxing pariah. She has never worked a high-profile fight since.

The Canelo-GGG rematch was actually scheduled to take place four months earlier on Cinco De Mayo weekend. However, while he was in training, Canelo was informed that he had tested positive for a banned substance (clenbuterol) and the bout was postponed. As a consequence, the Mexican star was stripped of his Ring championship, removed from the ratings, and he served a six-month retroactive ban.

Any respect that existed between the fighters was replaced by hostility. Canelo has always maintained his innocence and blamed contaminated meat for the failed VADA test. Golovkin has held a grudge that is unlikely to ever fade.

Following a poisonous buildup, the sequel turned out to be better than the original. Accused by Team GGG of running in fight one, Canelo purposefully duked it out with the fearsome champion in a classic struggle. The Mexican star dished out plenty of damage and withstood everything Golovkin had to offer. There were no knockdowns, but the action was of the highest quality.

There is no question that the scoring controversy in the first encounter contributed to the furore that surrounded Canelo’s triumph in the rematch. In reality, the second fight could have gone either way and opinions varied.

The pair collide in a de facto rubber match, this Saturday, again at the T-Mobile Arena, and Canelo’s undisputed super middleweight title will be at stake.