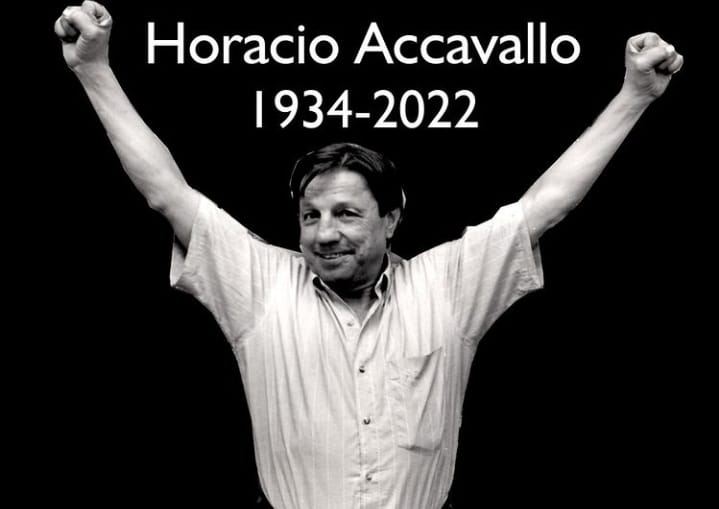 Accavallo was Argentina’s second champion in history, having won his WBA and WBC titles in March 1966 and relinquishing them as undefeated champion on October 1968, retiring with an amazing record of 75-2-6 with 34 knockouts.

“This is how I will remember you, dad,” wrote his son Horacio Jr. in a social media post. “With your arms raised high, like a champion. Thank you for your teachings and for instilling your values in me. Rest in peace.”

Born in abject poverty on Oct. 14 1934 to an Italian father and a Spanish mother, “Roquiño” was raised in the slums around La Quema, a landfill in which he daily dug up recyclable material to be sold in order to survive. As a boy he sold newspapers and shone shoes to help ends meet, and he made his debut as a prizefighter in 1956 to embark in a career that would know only two losses in 12 years, an extraordinary accomplishment during an era of extraordinary talent in boxing and in his division in general.

His memorable bouts against Italy’s Salvatore Burruni (champion at the time, who in spite of having lost to Accavallo twice would not give him a chance to fight for the title) led him to a vacant title fight against Japan’s Katsuyoshi Takayama at Tokyo’s Nippon Budokkan. Scoring a hard-fought split-decision win, Accavallo became Argentina’s second world titlist after Pascual Perez, who had also won his title in Japan (against Yoshio Shirai in 1954).

His reign would be short-lived, however. He defended his title against Japan’s Hiroyuki Ebihara and Mexico’s Efren Torres in Buenos Aires, winning by close decision in both occasions. After a non-title loss to Kiyoshi Tanabe in Japan’s Korakuen Hall, Accavallo won a controversial majority decision in his rematch against Ebihara in Buenos Aires, announcing his retirement shortly thereafter.

Upon his retirement, Accavallo was featured numerous times as a guest in TV shows, making use of his comedic abilities. He owned a successful chain of sporting goods stores, and was a beloved and well-remembered figure in the Argentine boxing world. He developed a serious case of Alzheimer’s disease and was committed to a nursing facility in his later years.

Accavallo passed away only hours shy of the start of Argentina’s “Boxer’s Day,” (in remembrance of Luis Angel Firpo’s epic battle against Jack Dempsey in 1923) and one month shy of his 88th birthday.