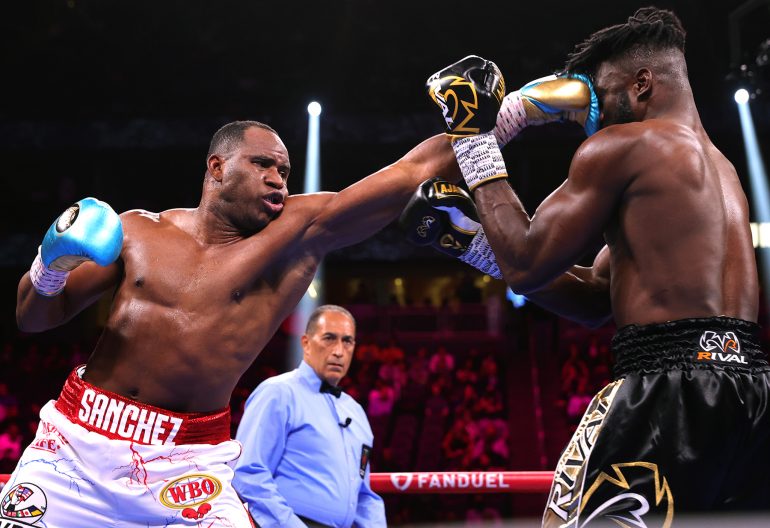 Two high-stakes showdowns have been added to the four-fight FOX Sports PBC Pay-Per-View event headlined by the return of former WBC heavyweight titlist Deontay “The Bronze Bomber” Wilder as he takes on Robert “The Nordic Nightmare” Helenius on Saturday, October 15 from Barclays Center in Brooklyn.

An amateur standout from his native Cuba, Sánchez (20-0, 13 KOs) now trains in California with renowned trainer Joe Goossen. The 30-year-old has remained busy on his rise up the heavyweight rankings, scoring three victories in 2020 as he earned a unanimous decision over Joey Dawejko and stopped Brian Howard and Julian Fernandez. Sanchez caught boxing fan’s attention when he scored a career-best win in October 2021, dropping the previously unbeaten Efe Ajagba on his way to a unanimous decision victory. Sanchez kicked off the New Year with a 10-round decision triumph against Christian Hammer in his last fight.

“Carlos Negron is a dangerous opponent, but I will be ready for whatever he brings. I intend to look for a knockout against Negron to demonstrate to boxing fans that I am both a boxer and a puncher,’’ said Sanchez. “I feel I am the best heavyweight in the world and October 15 will bring me one step closer to the very important goal of becoming mandatory contender for a world title opportunity in 2023.’’

The 2008 Puerto Rican Olympian Negron (25-3, 20 KOs) was scheduled to meet Sanchez on January 1 but had to withdraw from the fight after testing positive for COVID-19. Negron rides a five-fight winning streak into the match against Sanchez, including four wins by stoppage. The 34-year-old bounced back from defeats to Dominic Breazeale and Brian Howard to put together his win streak, which includes a March 2020 knockout over previously unbeaten Robert Alfonso. He scored an eight round unanimous decision over Scott Alexander in his last fight in May 2021. Negron has fought professionally since 2009 and now lives in Miami where he trains alongside Luis Ortiz.

“I know Frank, and I’ve never been a fighter to call any other fighters out or speak of any other boxer, so I don’t know why he asked to fight me,” said Negron. “When my coach told me he wanted to fight me, I didn’t take it personally. I took it like a challenge. It gave me incredible motivation, and now I want to fight him. Let’s see what I can do against good competition. I have always done my best against better opponents. So come October 15, let’s see who’s the better man.”

The 29-year-old Russell (19-0, 12 KOs) originally met the former champion Rodriguez in August 2021, but an accidental clash of heads ended the fight as a no-contest before the first round was completed. The middle brother between WBC Featherweight Champion Gary Jr. and 2016 U.S. Olympian Gary Antuanne, Russell returned to the ring after the Rodriguez bout to earn a decision victory over Alexis Santiago in November 2021. Fighting out of Capitol Heights, Maryland, Russell also owns a decision victory over former world champion Juan Carlos Payano in December 2020.

“I’m glad that Emmanuel and I will get our chance to have a redo on October 15,” said Russell. “Nothing has changed as far as my objective. I’m coming into the ring at Barclays Center to do whatever I have to do in order to finish this fight victorious.”

Fighting out of Manati, Puerto Rico, Rodríguez (20-2, 13 KOs) has also added a victory since his first clash with Russell, knocking out Roberto Sanchez Cantu in March. The 30-year-old won the IBF Bantamweight World Title with a unanimous decision victory over Paul Butler in 2018 and successfully defended it against then-unbeaten Jason Moloney. Rodríguez went on to lose the title to unbeaten champion Naoya Inoue in their May 2019 title bout.

“I’ve been training in Mexico for a long time and away from my family so that I can focus on this fight that will define my future,” said Rodriguez. “Russell is a good fighter who has been avoided throughout his career, but I’ve come to show that I’m on another level. I will win hands down and be back on top of the bantamweight division. On October 15, he’s going to realize that he’s not on my level.”

A press release from Premier Boxing Champions was used in this article.