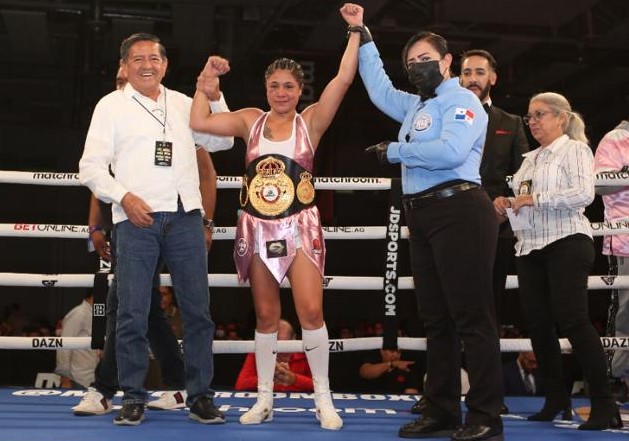 Every rematch is necessarily different than the first encounter, but the differences between the first fight between current WBA featherweight titlist Erika Cruz-Hernandez and her predecessor Jelena Mrdjenovich and the rematch upon they are set to embark on are quite big.

The same title that Cruz took from Mrjenovich will be at stake, and predictably enough the champ has made her Canadian foe travel all the way to Cruz’s home country of Mexico to attempt to regain it. But the stakes are considerably higher for both combatants in this clash that will take place in Hermosillo, Sonora, on September 3.

There is a belt at play, indeed. But there is also a chance to meet top pound-for-pound entrant and future all-time great Amanda Serrano in what would surely be the biggest fight in the division’s history. And if Cruz-Hernandez wins, it will also be quite the grudge match, given the bad blood that has been brewing between them during the failed negotiations to have them fight for all the marbles before this night.

Cruz-Hernandez is quick to dismiss the notion that she is the one to blame for the failure of said negotiations.

“The fight against Serrano was not done because sometimes the situation is not fair and balanced for everyone,” said Cruz-Hernandez in a phone interview. “There are things that needed to be worked out with our promotional companies. We all like to blame the athletes but sometimes there are things that I cannot do. But I am not afraid of Amanda Serrano. In fact, if God willing I emerge victorious on September 3, I would love to fight the winner of the fight between Amanda and Sarah (Mahfoud). I want that fight, and I want Amanda to know that I am not afraid of her. That fight should happen at some point.”

Serrano is scheduled to meet IBF titlist Mahfoud on Sept. 24, risking her own WBC/WBO belts in the process in a fight that could (should there be a winner) crown the inaugural Ring champion in that division. And even though Cruz-Hernandez claims she’s ready to face either one of them, she clearly expects Serrano to come out victorious.

“I might be wrong in my answer, but I believe it’s Serrano’s fight to lose,” said Cruz-Hernandez. “She is a great athlete, she is very experienced. Sarah has only a few fights just like me, and has only one title defense. I think that Serrano has everything she needs to win that fight. It will be an interesting fight but I don’t see Serrano having any problems to get the win.”

Even in the event of a win by Serrano, the issue of her own fight against Puerto Rico’s “Real Deal” is not taken for granted by Cruz-Hernandez.

“For that fight to happen, first we both have to win our next fights. We need our companies to talk, to have a fair compensation for both of us, and then wait for that to happen. And it will be a really interesting fight.”

Winning her impending challenge will take more than just a solid performance. The 32-year-old member of the Mexican National Guard defeated Mrdjenovich on April 22, 2021 with a win that was marred to some extent by a number of unintentional headbutts that opened a few severe cuts in Mrdjenovich’s head. The fight had to be stopped in the seventh round due to that, and Cruz-Hernandez was then pronounced champion.

This time, “Dinamita” hopes to win in a cleaner fashion, although she still fails to acknowledge the roughness of her performance in the first bout.

“I am not sure there was any controversy. I believe my win was pretty clear,” said Cruz-Hernandez. “I don’t know whether she made any accusations of illegal punches. I never heard anything about it. Maybe because of that she is giving me another shot, and I am giving it to her as well, because she is a true champion who has reigned for many years in the division and deserves another opportunity. I am grateful with Matchroom for giving me another chance to demonstrate that I am a better fighter than Jelena, and that’s why I defeated her. I didn’t win using illegal punches, that’s a lie.  On Saturday I have to show that I didn’t win by sheer luck the first time, but rather because I am a great fighter.”

In any case, a completely different fight is expected on Saturday, and both fighters will be looking to avoid the situations that made the first fight such a hard-fought and bloodied event.

“I think the difference in this fight will be that we are both prepared differently and in the best possible way. Of course I am sure we’ve made adjustments, because even though I won that first fight I know that I made some mistakes. Sometimes we practice so hard that we forget a few things. But this time I will be much better prepared in every way, because I know she will be ready too, and she will want to recuperate what was once hers. But I am ready to give 10 very hard rounds of intense fighting, and I won’t let her take away from me this title that I’ve worked so hard for. We are going to win convincingly, I am going for a big win.”