No winners in Jose Pedraza-Richard Commey shootout, bout ends in 10-round draw 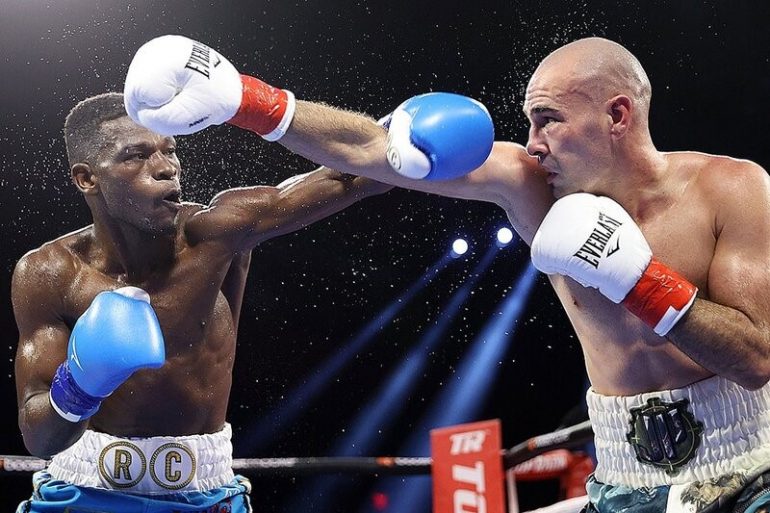 A result nobody wanted in this junior welterweight non-title clash – unless you bet on it.

The crossroads battle between former world titleholders Jose Pedraza and Richard Commey ended in a 10-round split decision draw at the Hard Rock Hotel & Casino in Tulsa, Oklahoma, on Saturday. The scores were 97-93 Commey, 96-94 Pedraza, with 95-95 the deciding tally.

Commey, a former lightweight titleholder, got off to a brisk start and looked sharp. An impressive burst of combination punching had a visible effect on Pedraza, who clinched in order to shake off the cobwebs.

The switching hitting Pedraza, who previously captured world titles at 130 and 135 pounds, used his counter punching savvy and movement to stay in the game. However, it was the Ghanaian star who landed the more effective punches through the first five rounds.

But this was a fight of two halves.

In Round 6, what appeared to be a clash of heads cut Commey over the left eye. Clearly distracted, the bleeding fighter backed off, stopped throwing punches, and pawed at his injury. Sensing his opponent’s predicament, Pedraza scored his best punch of the fight – a solid left hand to the chin. Commey landed his own right at the end of the round, but he lost the session.

Galvanized by his success, Pedraza continued to let his hands go, whereas his opponent’s accuracy and success dropped. The Puerto Rican’s left hand was scoring effectively and Commey was unable to produce the combination attacks that worked for him earlier in the fight.

The pace dropped in the eighth, but Pedraza enjoyed a very good Round 9. His offense was more versatile, he was busier, and Commey retreated from a steady stream of combination attacks. This was the most dominant round by either fighter.

With the fight in the balance, one would have expected a shootout in the 10th. However, other than in the last 30 seconds, both men nonchalantly gave the feint and threw out some shots. There was no sense of urgency from either man.

The official result was a fair one and there was talk of a direct rematch.

Anderson (12-0, 12 KOs) switched adeptly from southpaw to orthodox in the opening round and released shots up and down. The visitor avoided the worst of it, but did catch one memorable left hook-right hand combination.

The second round was messy. Rovcanin did a nice job of interrupting the Toledo-born fighter’s offense and caused him some frustration. That was clear when Anderson knocked his opponent’s mouthpiece out with a left hand on the break.

Late in the session, the 22-year-old Anderson landed a pair of blistering left hooks to the body and the pair began to trade up close. Rovcanin fired back gamely but he was nailed by a crushing right hand that put him down for the count.

Just seconds into the bout, southpaw Torrez landed a pair of straight lefts to the body to set up a powerful left hand knockdown. And it wasn’t a flash. As he took the mandatory eight count, Canedo wore the expression of a man who would rather be somewhere else.

The finish was almost identical to the first knockdown. Torrez, 23, probed with the right jab and backed his man up with the left to the body. When Canedo’s back touched the ropes, Torrez let the left hand go upstairs and the Mexican journeyman was finished. The damage was compounded when Torrez followed up with a huge right hook that knocked Canedo out cold. It took several worrying minutes for the stricken fighter to recover, but he thankfully left the ring under his own steam.