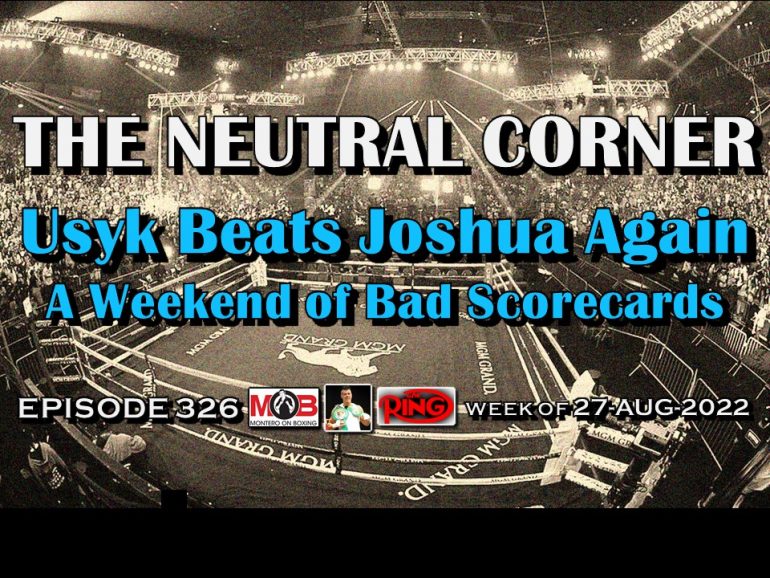 On episode 326 of The Neutral Corner boxing podcast, host Michael Montero reviewed a loaded weekend of boxing around the world.

On Saturday, August 20 in Jeddah, Saudi Arabia, Oleksandr Usyk defeated Anthony Joshua once again, this time by split decision. It should have been unanimous for the Ukrainian, but Judge Glenn Feldman somehow scored the bout 115-113 for Joshua. Feldman, a veteran judge, has rendered several dubious scorecards in recent years. Usyk (20-0, 13 knockouts) says he wants former champ Tyson Fury next. On the undercard, Filip Hrgovic won a razor-thin decision over Zhilei Zhang in a heavyweight thriller. Hrgovic is now the mandatory for one of the unified titles Usyk currently holds. The Matchroom card was broadcast on DAZN.

In Florida, Sergey Lipinets battered Omar Figueroa Jr over eight one-sided rounds in a 140-pound fight. Figueroa retired after the eighth round, giving Lipinets the TKO 8 win. In the co-main, Alberto Puello scored a controversial split decision win over Botirzhon Akhmedov in a junior welterweight bout. Most fans and media agreed that Akhmedov won, yet Judges Benoit Roussel and Mark Streisand had it 117-111 for Puello. Earlier on, Hector Garcia beat Roger Gutierrez by unanimous decision in a 130-pound fight. The PBC card was broadcast on Showtime.

In San Diego, California, Emanuel Navarrete struggled against Eduardo Baez, but ended things in a flash when he landed a hook to the body in the sixth round. Baez was dropped and counted out, giving Navarrete the KO 6 win. The Mexican successfully defended his featherweight title for the third time. In the co-main, Giovani Santillan scored a UD 10 win over Julio Luna Avila in a welterweight bout. Although most felt Santillan won, it was a very close fight. Judges Rudy Barragan and Alejandro Rochin disagreed, scoring the bout 100-90 for the San Diego native. Those scorecards were atrocious and tarnished an entertaining Top Rank card that was broadcast on ESPN.