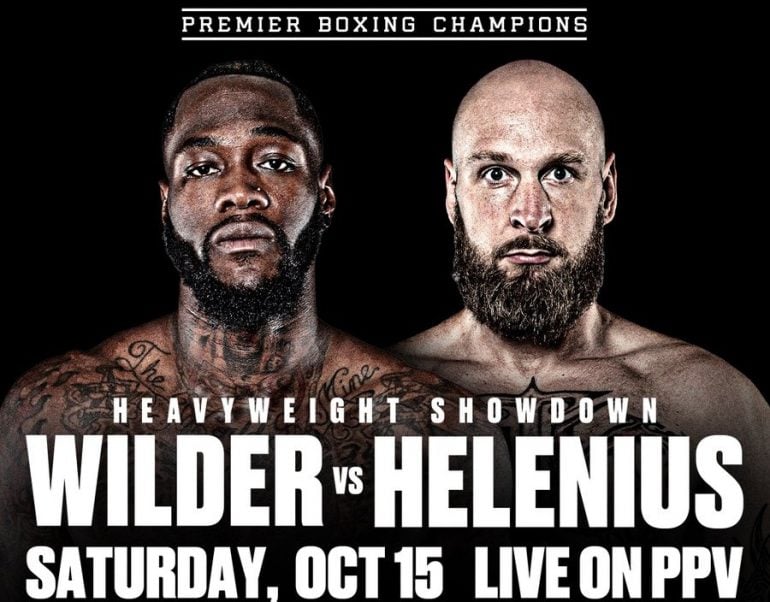 Former WBC heavyweight champion Deontay “The Bronze Bomber” Wilder will take on top-rated Robert “The Nordic Nightmare” Helenius in an explosive 12-round main event between ferocious punchers in a FOX Sports PBC Pay-Per-View Saturday, Oct. 15 at Barclays Center in Brooklyn.

Two additional pay-per-view undercard bouts will be announced to round out the action-packed four-fight lineup presented by PBC.

One of the greatest knockout artists in boxing history, Wilder (42-2-1, 41 KOs) is on a mission to become a two-time world heavyweight champion following a first reign that included 10 title defenses, a feat accomplished by only seven heavyweights in boxing history. The “Bronze Bomber” now returns to Barclays Center, a venue where he has fought four times and thrilled the crowd with some of his most spectacular knockouts. The 36-year-old slugger from Tuscaloosa, Alabama earned his moniker by winning bronze at the 2008 Olympics. He rejuvenated the heavyweight division when he captured the WBC belt in January 2015, becoming one of boxing’s biggest stars with an all-time heavyweight best 91.1% knockout percentage and a captivating personality to match. Coming off an epic trilogy with Tyson Fury, Wilder remains must-see television and one of the greatest fighters of this era.

Helenius (30-3, 19 KOs) stamped himself as one of the world’s best heavyweights with consecutive stoppage wins over the previously unbeaten Adam Kownacki, including an October 2021 sixth-round TKO win over Kownacki in Helenius’ last outing. Born in Sweden and fighting out of Mariehamn, Finland, Helenius established himself as one of Europe’s top heavyweights prior to making his U.S. debut in 2019. The 38-year-old “Nordic Nightmare” has won six of his last seven bouts.

The 30-year-old Plant (21-1, 12 KOs) used his sublime boxing skills to rise through the ranks of the super middleweight division. In his first world championship fight, the Ashland City, Tennessee-native Plant, who now lives and trains in Las Vegas, took the fight to veteran Jose Uzcategui and won the title in a hard-fought unanimous decision in 2019. Plant dropped the first match of his career in his last fight, losing to Canelo Alvarez in an undisputed super middleweight championship fight on November 6. He will look to rebound and get back on the world title track in a grudge match against his rival, Dirrell.

Dirrell (34-2, 25 KOs) is a two-time super middleweight world champion who won one of the toughest battles of his life when he beat non-Hodgkin’s lymphoma in 2008. The 37-year-old from Flint, Michigan won his first world title with a unanimous decision victory over Sakio Bika in 2014. He lost the title the next year via majority decision to Badou Jack. He would have to wait four years for another opportunity but successfully regained it with a technical split-decision over Avni Yildirim. He lost the title again, this time on a ninth-round TKO to David Benavidez in 2019. Dirrell is coming off of a fourth-round KO victory over Marcos Hernandez in his most recent match on November 6.

A press release by Premier Boxing Champions was used in this article.