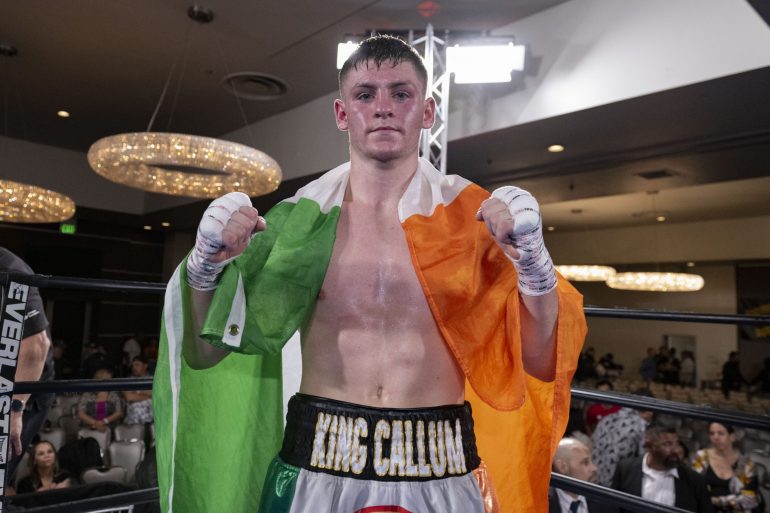 MONTEBELLO, Calif. – Another fight, another win for Callum Walsh. Only this time, Walsh earned the victory by going the distance.

All three judges at ringside scored the fight 60-53 in favor of Walsh, who improves to 4-0, 3 knockouts.

With UFC President Dana White watching from ringside, the southpaw Walsh, who is originally from Cork, Ireland, and now resides in Long Beach, California, demonstrated why he is a fighter to watch at 154 pounds. Walsh mixed his attack effectively, throwing several combinations to Whitaker’s head and body behind an effective jab. 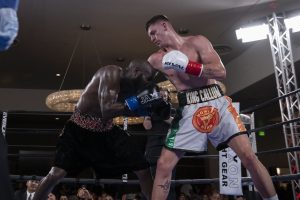 Walsh scored a knockdown within a few moments of the opening bell. A barrage of punches dropped Whitaker to the canvas but he was not visbily hurt and fought on.

Whitaker showed ring savvy by holding onto Walsh anytime the six-time Irish national amateur champion closed the distance. He was able to occasionally connect to Walsh’s head but for every punch Whitaker landed, Walsh would land three or four of his own.

By the fifth round, Whitaker looked like he was in survival mode. Walsh was content to let Whitaker initate exchanges in an attempt to counter with hooks and crosses. Walsh fought from distance during the final round but did clip Whitaker during the final seconds. Walsh attempted to follow up but the bell sounded to end the round.

Walsh, who is trained by Freddie Roach, entered the Whitaker fight having scored knockout wins in the first round in each of his first three fights.

“It’s good to go the distance with a good-enough opponent,” said Walsh after the fight. “I hurt my left hand with the first punch I threw.”

Tom Loeffler, who promotes Walsh, announced the 21-year-old will return to the ring in an eight-round bout sometime in October.

Whitaker, who resides in San Antonio, Texas, drops to 15-9, 3 KOs. He has lost his last five bouts.

In the co-feature bout, featherweight Omar Cande Trinidad, of nearby Boyle Heights, improved to 9-0-1, 7 KOs by stopping Javier Padilla at 1:42 of the fourth round.

Both fighters stood in the pocket and traded in the center of the ring. Trinidad landed the more effective punches, mixing his attack to the head and body. 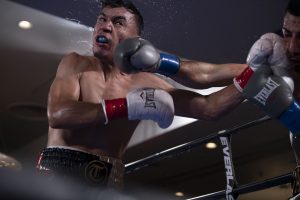 During the fourth round, Trinidad bloodied Padilla’s nose. Trinidad stepped up his aggression, leading to him connecting with a barrage of punches upstairs, prompting referee Gerard White to step in and stop the fight.

The taller Kilic dictated the pace of the fight from the opening bell, working behind a consistent jab. Delgado was game and found success in spots but Kilic was more effective throughout the fight.

Kilic, who is originally from Germany and now resides in North Hollywood, California, has now won his last three fights since suffering his only loss as a pro at the hands of Steven Nelson in January 2020. 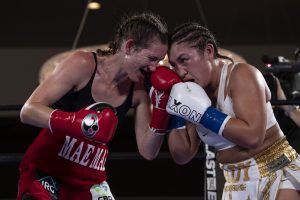 Satybaldinova was the aggressor against the taller Anderson, throwing an abundant amount of punches. Anderson decided to hold her ground midway through the fight, producing excellent exchanges between the two fighters.

The crowd was on its feet during the final two rounds of the fight as both continued standing in the pocket, throwing hooks and crosses. After the final bell sounded to end the fight, both fighters embraced each other.

Satybaldinova, who now resides in Hollywood, California, drops to 6-3-1, 2 KOs.

In a clash of unbeaten middleweights, Eric Priest, of Los Angeles, improved to 8-0, 6 KOs, by knocking out Las Vegas’ Cory Conner (3-1, 2 KOs) at 2:46 of the opening round. A right cross dropped Conner to the canvas. Conner struggled to get up but was unable to beat the count by referee Eddie Hernandez.

Super middleweight Jordan Panthan, of Hawaii, was successful in his pro debut, stopping Arturo Manriquez Perez (2-2-2, 1 KO) at 1:16 of the opening round. Panthan was a 2021 National Golden Gloves champion.