Born on this day: Ike Williams 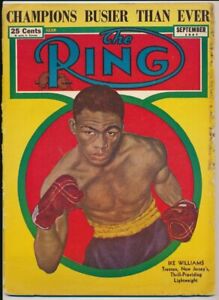 As a kid from a family in dire need, he sold newspapers in street corners to help make ends meet. As a fighter, he faced and defeated some of the best men of his era. And as a true champion of his pugilistic brethren, he stood before Congress to testify about the evils that prevented him from achieving even greater heights.

Isaiah “Ike” Williams, born August 2, 1923 in Brunswick, Georgia, honed his fighting skills as a kid in New Jersey after moving there with his family, fighting other kids for the right to sell newspapers in the most lucrative traffic stops in the city. He transitioned to a professional career in the hurt business in 1940, making his debut at the age of 16 and embarking on a career that would take him to the lightweight title (NBA version) only five years later with a win over Juan Zurita, and later a further validation of his claims with a victory over Bob Montgomery in 1947, in which he unified his belt with the NYSAC version and claimed The Ring’s vacant belt as well.

Known for his demolishing right cross and a terrific body punching technique that earned him a place in The Ring’s list of the top 100 punchers of all time as well as an award as Fighter of the Year in 1948, Williams faced some of the best of his era, including Jimmy Carter, Beau Jack, Jesse Flores, Sammy Angott, Bob Montgomery and many others.

One of his greatest chapters, however, was written outside the ring.

In 1961 Williams testified before Congress on matters related to corruption in boxing. In a detailed testimony, he exposed the bribery and the robbery that took place in the boxing business of his days as a professional, in an era in which organized crime ruled the boxing world.  Williams claimed that this affected his career negatively, but his testimony contributed to put an end to those same corrupt practices in the future.

Williams died on September 5, 1994 in Los Angeles, and was an inaugural inductee to the International Boxing Hall of Fame in 1990.