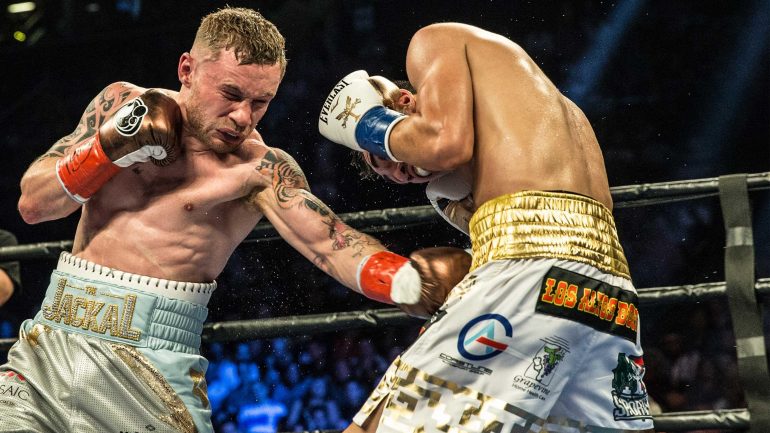 A battle of unbeatens that truly delivered.

Frampton entered the bout on top form. The Belfast man was coming off a 12-round split decision triumph over white-hot rival Scott Quigg, in Manchester, England, which saw him consolidate IBF and WBA 122-pound titles.

However, Santa Cruz was an audacious choice of opponent for Frampton’s featherweight debut. A three-division world titleholder, the defending champ was one of the most respected fighters in world boxing. Battle hardened and cerebral in equal measure, Santa Cruz entered this bout as favorite with oddsmakers and most experts.

The action was elite-level from beginning to end. Frampton broke through first, shaking Santa Cruz with a left hook in Round 2, and he controlled the majority of the early sessions. Santa Cruz enjoyed a good spell in the middle of the fight, but Frampton regained control and deserved to win the decision.

“It was a brilliant fight to watch,” Frampton told The Ring in 2020. “I was happy how I performed and I won the fight. I did the business that night and became a two-weight world champion, in New York, and it was an amazing feeling.”

Frampton was later named The Ring Magazine Fighter of the Year.