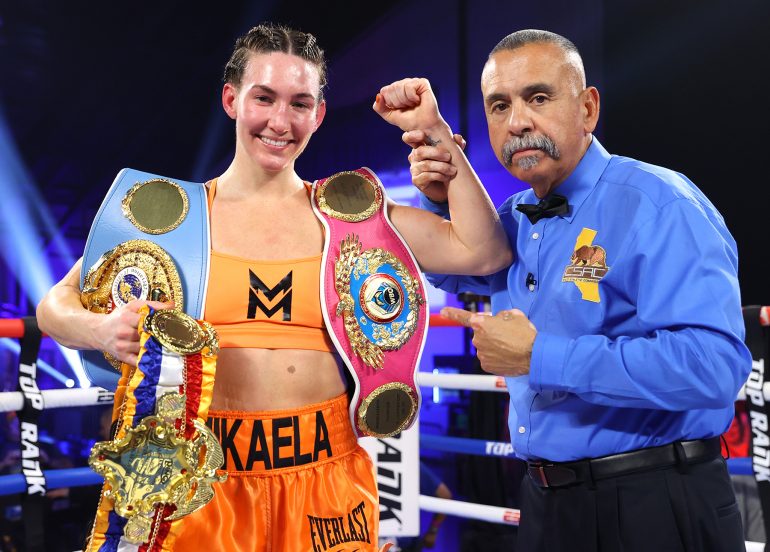 Mikaela Mayer is victorious as she defeats Jennifer Han during their WBO and IBF junior lightweight championship fight at The Hangar on April 09, 2022 in Costa Mesa, California. (Photo by Mikey Williams/Top Rank Inc via Getty Images)
29
Jul
by Tom Gray

Articulate, personable, indeed so charming that it’s easy to forget that Mikaela Mayer is one of the finest female fighters in the world today.

That demeanor remains consistent until her next opponent is brought into the conversation.

Mayer is in the middle of hard training for her Ring, IBF and WBO junior lightweight title defense against WBC counterpart Alycia Baumgardner, which will take place at the O2 Arena in London on September 10.

Baumgardner, who is rated No. 2 by The Ring at 130 pounds, is viewed by many as the toughest challenge of Mayer’s career to date. The Michigan-based boxer-puncher is 12-1 (7 KOs) and annexed the WBC title by scoring a fourth-round stoppage of the then-unbeaten Terri Harper last November.

However, not everyone is convinced.

“She does have a handful of knockouts, but she hasn’t been tested like I have,” Mayer (17-0, 5 KOs) told The Ring in a recent interview. “The girls that she knocked out all had losing records up until Terri Harper, and I don’t think Terri Harper was at her best. Baumgardner caught her and you’ve got to give her props for that. But when she can’t land that right hand, there’s no plan B. In her last fight, with [Edith] Matthysse (won UD 10), she couldn’t land that big right hand and there was no second gear.

“Baumgardner said she’s gonna ‘dog walk’ me, but we’ve never seen the dog in her. She didn’t have that heart, she didn’t bite down and take it to Matthysse. She knows this girl is nowhere near her skill-level, nowhere near her strength, and she still couldn’t back her up. That shows me that Baumgardner likes her space. She likes to be in her comfort zone. What happens when someone takes her out of that comfort zone, like we seen against [Christina] Linardatou (the last fighter to defeat Baumgardner, in July 2018)? Linardatou pushed her back, took her out of her comfort zone and she didn’t have an answer for it. Alycia Baumgardner is still very one-dimensional and if she can’t land that big right hand, she doesn’t have anything else for me. I’m going to press her and expose that side of her.” 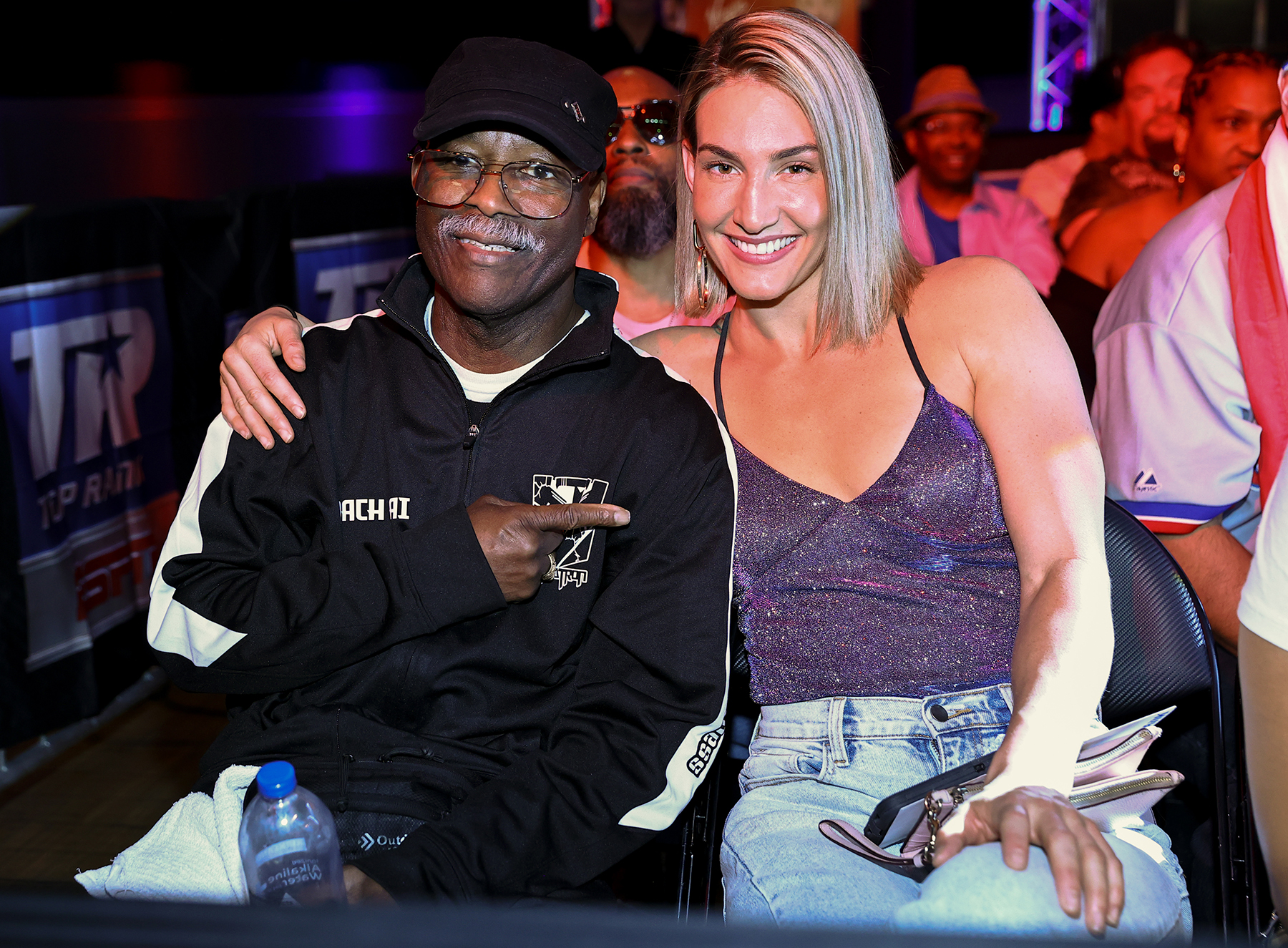 The 32-year-old Mayer is rated No. 4 by The Ring on the women’s pound-for-pound list. The California-born star captured the WBO title in October 2020, when she outpointed the previously unbeaten Ewa Brodnicka. The Ring and IBF belts were added when Mayer scored a wide decision over Maiva Hamadouche in November 2021. Her excellent professional success was preceded by a World Championship bronze medal in 2012, and Mayer also competed in the 2016 Olympics in Rio.

A seamless transition to the pro ranks was all but guaranteed.

“Top Rank are Hall of Fame matchmakers for a reason,” said Mayer. “They’ve put me in fights that have tested me in different ways. I’ve fought former world champions, world champions, contenders, so they’ve given me the experience I need.

“I also have Al Mitchell in my corner. I don’t have ‘yes’ men in my corner, and I believe that [Baumgardner] does. Coach Al pushes me to get better and doesn’t let me get complacent. I have a better team, better experience, and a higher IQ.”

The war of words hasn’t been one-sided. Baumgardner predicts a knockout and has labelled her opponent “spoiled.”

If the action in the ring matches the hostility outside of it, this junior lightweight unification bout is sure to deliver.

Mayer-Baumgardner serves as co-main event to the undisputed middleweight championship bout between Claressa Shields and Savannah Marshall. The event will be broadcast by ESPN in the U.S. and Sky Sports in the U.K.