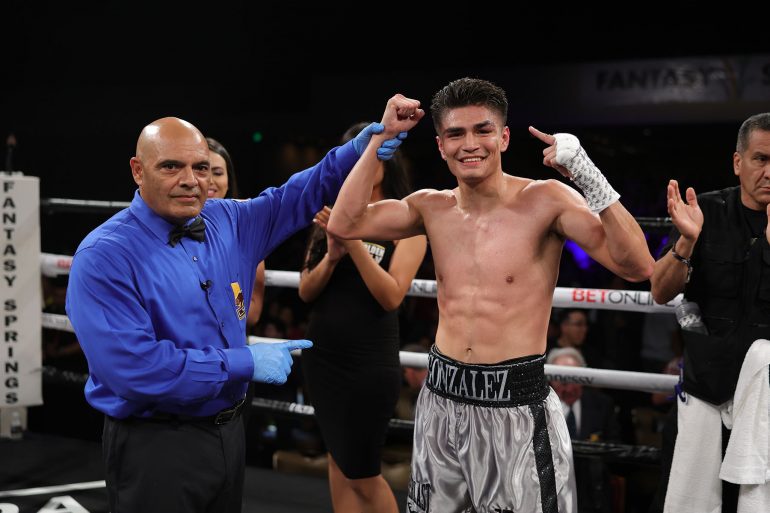 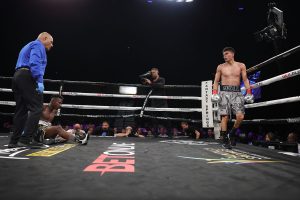 Jousce Gonzalez ended his competitive bout with Jose Angulo in the third round. Photo by Cris Esqueda/Golden Boy

Gonzalez (13-0-1, 12 KOs), the younger brother of two-time featherweight title challenger Joet Gonzalez, remained unbeaten with a body shot stoppage, paralyzing the tough Ecuadorian fighter with a left hook near the end of Round 3. Prior to the stoppage Angulo (14-3, 7 KOs) had boxed well, punching on the fly and occasionally sitting down on his shots. However, Gonzalez stepped up his pressure in Round 2, forcing Angulo to fight in retreat. After 2 minutes of tit-for-tat boxing in Round 3, Gonzalez found his opponent’s sweet spot and made it a short night.

“I knew he was going to box me from the beginning, so I was reading him, setting up for the right punches,” Gonzlaez said during his post-fight interview on DAZN. “My whole game plan was to make him uncomfortable, eventually he lifted his guard up and I caught him”

Gonzalez, who is promoted by Golden Boy, called out some of the promotional company’s lightweight standouts, believing that the Angulo victory proves that he’s ready for a significant step up in competition.

“This guys was solid,” he said. “He fought some good fighters and he’d never been knocked out. All I needed was one shot. ” 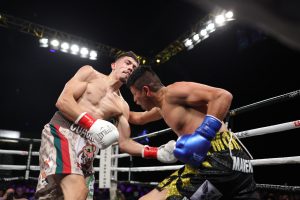 In the main supporting bout, local bantamweight prospect Manuel Flores scored a dynamic one-punch KO in the third round of his scheduled eight-rounder against Daniel Moncada. After two “feel-out” rounds, Flores (13-0, 10 KOs), a 23-year-old southpaw from Coachella, backed Moncada (15-7-2, 5 KOs) near a neutral corner where he stunned the experienced Mexican with a left to the body and then put the journeyman down with a left cross to the jaw. The bout was immediately waved off at 1:35 of the round.

“I seen I hurt him with the body shot, so I went for the kill,” Flores said during his post-fight interview on DAZN. “That’s what you gotta do (when you get an opponent hurt) but you gotta be smart about it.”

Junior lightweight prospect Elnur Abduraimov made quick work of Leonel Moreno, stopping the once-beaten Guadalajara native with the first power shot he launched, a straight left to the solar plexus that dropped Moreno (11-2-1, 9 KOs) for the 10 count. Referee Eddie Gonzalez waved the bout off at 1:14 of the opening round.

Abduraimov (10-0, 9 KOs), a 28-year-old southpaw boxer-puncher, is a former amateur standout who represented Uzbekistan at the 2020 Olympic Games. He now trains with Joel and Antonio Diaz in Indio along with several other standouts from the Uzbeki national amateur boxing squad.

Flyweight prospect Gabriela Fundora, the 20-year-old younger sister of junior middleweight contender Sebastian Fundora, dominated undersized and over-matched Lucia Nunez over eight rounds. Fundora (8-0, 4 KOs), a tall and rangy southpaw technician (with a busy, aggressive stalking style similar to her brother’s), methodically walked Nunez (7-13) down and punished the 32-year-old former Mexican national junior flyweight titleholder with a stiff jab and body-head combinations in every round. Fundora, who is from the nearby Coachella area, won via unanimous shutout (80-72).