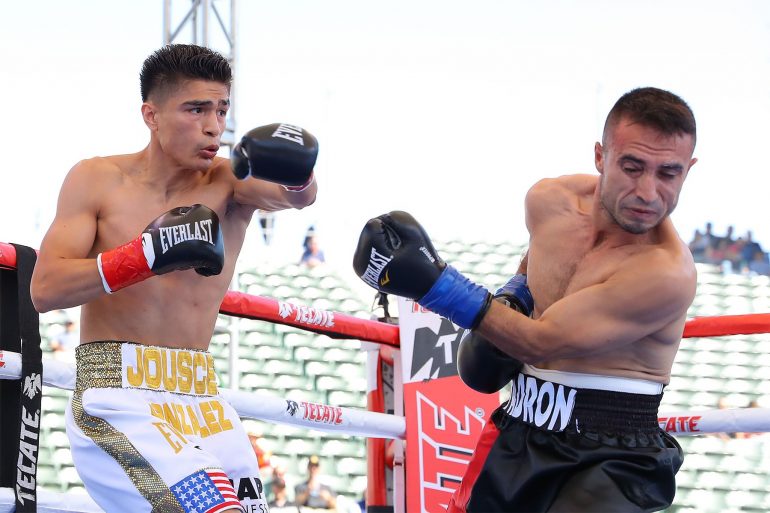 Unbeaten prospect Jousce Gonzalez has a lot on the line tonight. Not only is he attempting to carve out a name for himself in a competitive lightweight division, he is also trying to restore the family name in the process.

The hard-hitting Gonzalez (12-0-1, 11 knockouts), who resides in Covina, California, most recently fought on April 21, dropping Jairo Lopez multiple times before winning by knockout in the sixth round. In his previous fight on June 19 of last year, Gonzalez stopped journeyman Gabriel Gutierrez in the third round.

Gonzalez has won his last four bouts since fighting to a majority draw against Ivan Delgado in October 2018. The 27-year-old is the younger brother of featherweight contender Joet Gonzalez, who lost by split decision to Isaac Dogboe this past Saturday night, in Hinckley, Minnesota.

Angulo (14-2, 7 KOs), who is originally from Guayaquil, Ecuador, and now resides in Pixley, California, has not fought since stopping journeyman Jesus Vargas on February 27 of last year. He has won his last two bouts since losing by majority decision to then-unbeaten Alejandro Guerrero in March 2020.

In the co-feature, Manuel Flores, of nearby Coachella, will square off against Mexico City’s Daniel Colula Moncada (15-6-2, 5 KOs) in an eight-round junior featherweight bout.

Both Flores and Moncada, who has split his last six bouts, weighed in at 119.8 pounds.

Flores (12-0, 9 KOs) also fought on April 21, dropping gatekeeper Victor Ruiz three times before winning by knockout in the third round. The win over Ruiz marked Flores’ first fight as a pro in the Coachella Valley.

Gabriela Fundora, another fighter from Coachella, will face Lucia Nunez (7-12), who also resides in Mexico City, in an eight-round flyweight bout. Fundora (7-0, 4 KOs) is the younger sister of junior middleweight contender Sebastian Fundora.

Junior lightweight prospect Elnur Abduraimov (9-0, 8 KOs), a resident of Indio who is originally from Uzbekistan, will square off against Leonel Romero (11-1-1, 9 KOs), of Guadalajara, Mexico, in a 10-round bout.

In a clash of unbeaten middleweights, Eric Tudor (4-0, 3 KOs), of Fort Lauderdale, Florida, will face Arizona’s Edgar Valenzuela (7-0, 6 KOs) in a six-round bout.

Junior bantamweight Jasmine Artiga (8-0-1, 5 KOs) will square off against Amy Salinas (4-1), of Las Cruces, New Mexico, in a six-round bout. Artiga has fought her last five bouts in and around her hometown of Tampa, Florida.

In the opening bout of the Golden Boy Promotions card, Daniel Barrera, of Upland, California, will face Jesus Godinez (3-3, 2 KOs), of Nogales, Arizona, in a four-round bout. Barrera was an amateur standout who will be making his pro debut tonight.