Danny Garcia will have legacy on his mind against Jose Benavidez Jr. 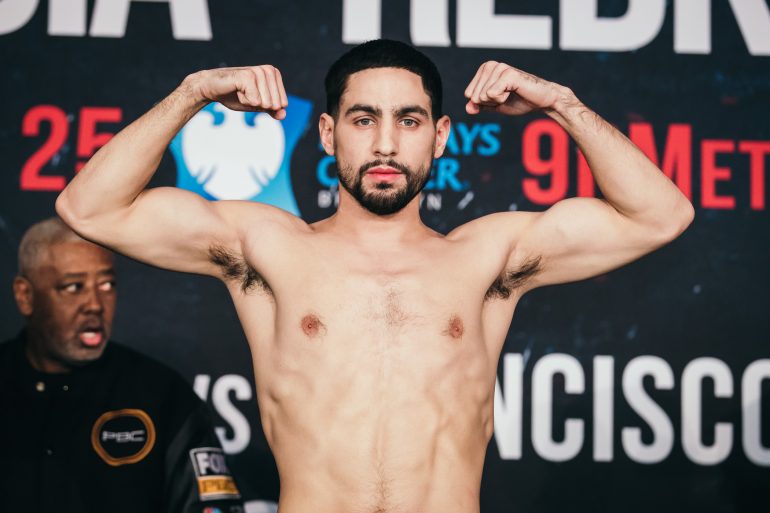 Something wasn’t right and Angel Garcia knew it. His son, Danny “Swift” Garcia, the former unified junior welterweight and welterweight titlist, was curled up in the car, crying from the pangs of anxiety and depression from the COVID-19 pandemic. He could not train like he wanted to. He couldn’t see his baby daughter. He was basically cut off from everything he would normally do during a training camp, and it spilled out before his fight with Errol Spence Jr. in December 2020.

“Danny should have never fought that fight,” Angel said. “If Danny would have fought Spence in March, like we planned, after his car accident, it would have been a different fight. Danny was suffering from demons. Spence and Danny were both suffering demons. I would never put my son through that again. I’m being honest. When we came home from training in the gym, he would be crying in the car, and I’d ask him, ‘Why are you crying?’ because he was in a dark place a lot of athletes don’t like talking about.

On Saturday, Garcia will be getting in the ring for the first time in 19 months and 26 days, the longest layoff of his amazing career, debuting at 154 pounds when he headlines the Showtime tripleheader (9pm ET/6pm PT) in a 12-round main event against Jose Benavidez Jr. from Barclays Center, in Brooklyn, New York, in a Premier Boxing Champions event.

Garcia (36-3, 21 knockouts) is 34 now. He knows the end of his career is a lot closer now than it was a few years back. The 30-year-old Benavidez Jr. (27-1-1, 18 KOs) is fighting for his relevance. He’s coming off an eight-month layoff and is 1-1-1 over his last three fights, which includes falling by 10-round knockout to WBO welterweight titlist and pound-for-pound entrant Terence “Bud” Crawford in October 2018.

“This is a great relief on my body,” said Danny, who looks incredible shape entering this fight. “I hear the talk that I may not be big enough at 154, but I fought big guys at 147. I’ve been on a world-class level for 20 years. I fought the best in the world. For the Keith Thurman, I was happy at the time, because I was able to make the weight easy. The Spence fight, and the Adrian Granados fight (in April 2019), I’m not going to lie, it was hard making 147. I was cutting it close.

“Spence beat me. All the credit to him. I was flat and I looked flat. I never felt right. I’m in a great place mentally. I can’t wait to fight. I also know where I am at this stage of my career. I realize the end is near. My daughter Philly is seven and I have another daughter on the way. Right now, as I’m talking, I have three fights in my head.

“I feel like I can make history winning another title at 154 pounds.”

Danny Garcia is one of the good guys in boxing, who’s highly respected. No one would want to see him fight beyond his skills.

“My goal is to walk away from boxing not beat up,” Danny said. “I’ve been smart with my money. I have great, trusted people around me like my father and Al Haymon. But I still love the sport. I also realize that I’m closer to the finish line. Benavidez is coming up from 140, 147, like I’m coming up to 154, so either of us are natural 154-punders. He’s a small guy like me. His last fight was at middleweight, but he’s no damned middleweight. I have to be smart. Right now, at 154, I have Benavidez, and two more fights after that in my head. I want to get this win and move forward from there.”

Swift feels he beat himself against Spence, The Ring’s No. 4 pound-for-pound fighter and No. 1 welterweight. He holds some solace in the fact that he went the distance with the welterweight division’s boogeyman and came away with nothing more than a black eye.

“Errol looked good, but he didn’t look great, and that was because of me,” Danny said. “I win this fight, and my daughter is due in August, so I wake up in the middle of the night to a crying baby. I’ve been in Miami for seven years. I check the stock market every day. If I visited the 19-year-old Danny Garcia, and I told him I would be involved in the stock market, young Danny would tell me not to do it, because you’re going to lose.

“I’m enjoying myself. It’s been a while since I could say that. My real goal is to help the younger fighters coming up. I’m promoting, but I have taken a step to take more time for fighting.”

Garcia says he’s very aware of Benavidez. He says he’s watched Benavidez his whole career. He admits Benavidez is a tough fighter. Though he doesn’t have the skills and quickness to stay with him.

Danny has been boxing for 24 years. He’s done enough to certainly merit Hall of Fame consideration when he does opt to retire. In those 24 years, however, have come thousands of miles of road work, thousands of punches he threw and absorbed, and thousands of grueling hours honing and refining his body for war.

What motivates him today?

“It’s matter of believing in myself, and when that day comes when I stop believing in myself, that will be it,” Swift said. “What keeps me coming back? I love it. I love boxing and on Saturday, June 30, everyone is going to see me doing what I love. They’ll see me being smart, and at the same time I’ll be letting my hands go. I don’t think I’ve been myself, who I am in the ring, for a few years now. The COVID pandemic really messed me up. On Saturday, June 30, they’re going to see the real Danny Garcia. I’m back.”