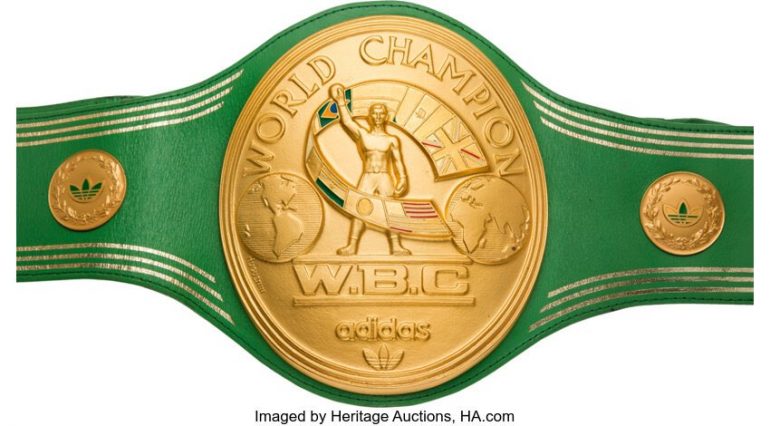 The “Rumble in the Jungle” is the gift that keeps on rumbling.

Almost 50 years after that legendary fight at dawn in the middle of the African jungle, the belt at play on that historic night has reportedly been purchased by NFL Indianapolis Colts owner Jim Irsay for $6.18 million.

“Proud to be the steward” of this famous belt, said the buyer in a tweet, in which he claimed it will be ready to be exhibited “just in time for the Aug. 2 show at Chicago’s Navy Pier (and Sept. 9 at Indy).”

According to Heritage Auctions in Dallas, the sale price, which was first reported by Sports Collectors Daily, was among the highest prices ever paid for a sports memorabilia item.

Muhammad Ali reclaimed that WBC championship belt in his October 30, 1974 “Rumble in the Jungle” win over George Foreman. In that fight, Ali stopped then-unbeaten George Foreman to recapture the heavyweight title in Kinshasa, Zaire (now the Democratic Republic of Congo) with an eighth-round knockout.

BREAKING—-Muhammad Ali’s
championship belt from 1974 ‘Rumble in the Jungle’ when he employed his rope-a-dope and defeated George Foreman—-just added to @IrsayCollection Just in time for the Aug. 2 show at Chicago’s Navy Pier (and Sept. 9 at Indy). Proud to be the steward!🙏 pic.twitter.com/REJOGV1Cwq