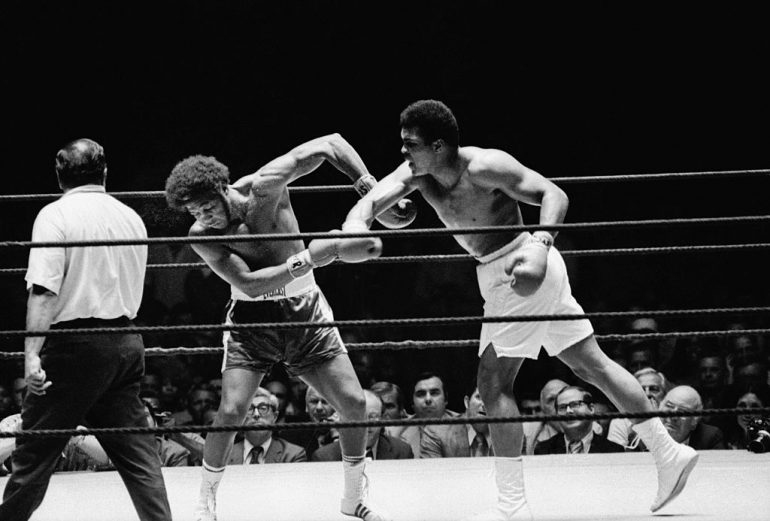 Photo by Bettmann/ Getty Images
26
Jul
by The Ring

Finally these guys got paid for punching each other.

On July 26, 1971, Muhammad Ali, who was then the former heavyweight champion of the world, scored a 12th-round stoppage over Jimmy Ellis at the Astrodome in Houston, Texas. The official time was 2:10.

The 29-year-old Ali was coming off his first professional defeat. On March 8, 1971, “The Greatest” was floored and outpointed by “Smokin” Joe Frazier in perhaps the finest heavyweight championship fight of all time.

Frazier was, and would remain, Ali’s number one nemesis. Conversely, Ellis, who hailed from Ali’s home city of Louisville, Kentucky, had been a friend since childhood and sparred hundreds of rounds with the ex-champ.

Ellis had an interesting and storied career. An average middleweight, who suffered points losses to Rubin “Hurricane” Carter, Don Fullmer and George Benton, he appeared to be on the road to nowhere. However, after leapfrogging his way to heavyweight, Ellis posted a string of excellent wins over Leotis Martin (TKO 9), Oscar Bonavena (UD 12), Jerry Quarry (MD 15) and Floyd Patterson (Decision 15). While Ellis was deemed very fortunate to get the nod over Patterson, his win over Quarry gave him the then-lightly regarded WBA title. Frazier would obliterate Ellis (TKO 5) in a pseudo unification fight in February 1970.

But when Ellis bounced back with three straight wins, including a points triumph over George Chuvalo (UD 10), he became an attractive opponent for Ali. Both men were trained by Angelo Dundee, but Ellis secured Dundee’s services as chief second by paying him both trainer and manager percentages. Ali, who was managed by Herbert Muhammad, replaced Dundee with Harry Wiley, a criminally underrated trainer who had previously worked with Sugar Ray Robinson.

The corner teams were irrelevant.

Ali was over 30 pounds heavier than the 189-pound Ellis and levels above. After showcasing his quick feet and defensive savvy in the early rounds, the former champ settled into the fight around the midway point. His jab found Ellis regularly and he shook his man more than once with the right.

Midway through Round 12, Ali stunned his friend with a sharp left uppercut and kept him on the hook with a follow-up right cross. Close enough to see Ellis’ eyes rolling into the back of his head, Ali refused to lower the boom. He was almost delicate with the single shots he did land, but Ellis was absolutely finished. Referee Jay Edson had seen enough and waved the bout over with the stricken Ellis sagging against the ropes.