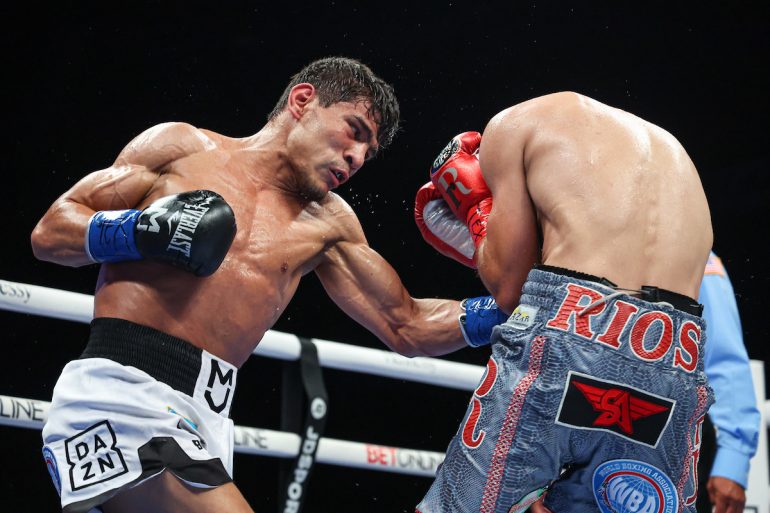 Murodjon Akhmadaliev takes it to Ronny Rios during their IBF/WBA 122-pound title fight at the Tech Port Arena in San Antonio, Texas. Photo by Ed Mulholland/Matchroom
26
Jul
by Anson Wainwright

Murodjon Akhmadaliev had to fight through a broken left hand to break down Ronnie Rios for a twelfth round stoppage to retain his IBF/ WBA junior featherweight titles on June 25.

“I had to overcome myself and fight until the end even though my [left] hand was broken,” Akhmadaliev (11-0, 8 knockouts) told The Ring through his manager Vadim Kornilov. “I had a serious injury in the second round. I think I punched him in the forehead.”

The 27-year-old Uzbekistan-born fighter tells The Ring that one of his bones was shattered in multiple pieces, and that he will need “the next couple of months” to allow it to rehabilitate.

“I thought during certain rounds that maybe I should stop as I could hurt my hand even more, but I knew this was not an option. Everything was on the line.”

Kornilov, who is famed for his work with Dmitry Bivol, Ruslan Provodnikov and Viktor Postol, was happy with the champion’s heart his fighter showed.

“Fight after fight he has proven that he is one of the best in the division and a very exciting boxer to watch,” said Kornilov. “MJ looked great and had to overcome hardships with his hand being broken, it shows his character and willpower.

“I think the earliest he will be ready is the end of this year, or beginning of next year.”

Akhmadaliev, who is rated No. 2 at 122-pounds by The Ring, says the Rios fight was a good experience for him.

“He is a Mexican fighter, very tough and very confident. He would never give up; I knew that I would have to break him down to the end if I wanted a stoppage,” said Akhmadaliev.

“My team wanted me to finish the fight in a conclusive and decisive fashion. That is what I did, I knew that I could do it, it was the plan initially.”

Akhmadaliev is in no doubt as to what he wants next.

“I want to fight for all the belts,” he said. “My goal is to become undisputed champion and possibly pursue titles in another division.”

Kornilov is optimistic he can deliver a lucrative meeting with WBC/WBO titlist Stephen Fulton to decide who is the premier junior featherweight in the world.

“I believe everything is possible,” said Kornilov when quizzed if a matchup would be possible with Akhmadaliev fighting for Matchroom on DAZN, while Fulton is with PBC and fighting on Showtime. “We are already working with our promoters on the next fight and the possibility of the Fulton fight happening next year.”