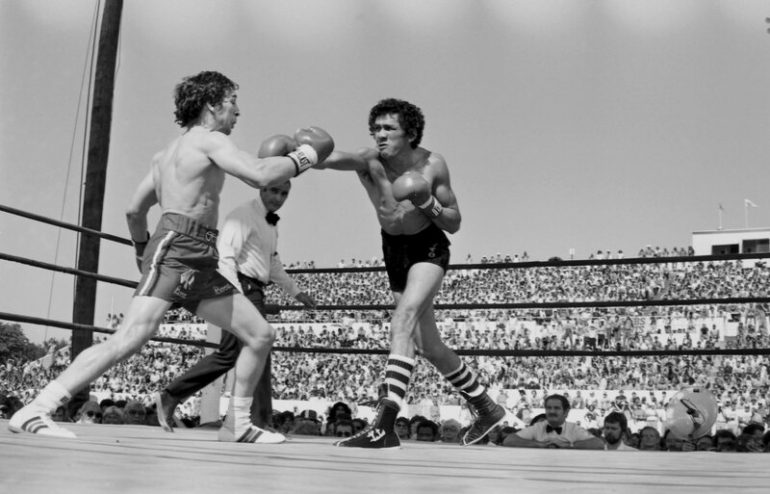 Mancini (left) in his first title defense against Ernesto Estrada. Photo by The Ring Magazine/ Getty Images
24
Jul
by The Ring

This guy was just made for TV.

On July 24, 1982, the super-popular Ray Mancini produced an exciting sixth-round stoppage of Venezuela’s Ernesto Espana to retain his WBA lightweight title at the Mollenkopf Stadium in Warren, Ohio. The official time – a subject of some controversy – is listed as 2:59.

Both men were coming off fights against Art Frias, but with vastly different results. In January of ’82, Espana succumbed to his second defeat to Frias, who was then the WBA titleholder. Frias was cut by what was ruled as an intentional butt and claimed a ninth-round technical decision win. However, four months later, Mancini scored an unforgettable first-round stoppage over Frias to lift the title in Las Vegas.

Espana was the first defense, and thousands made the short journey from Mancini’s hometown of Youngstown to watch their hero.

“The steel mills shut down in 1977,” recalled Mancini in an interview with The Ring many years later. “At that time, unemployment was 28 percent; almost a third of people were out of work. Bob Arum (the event promoter) wanted to charge $100 ringside, $50 reserved, $25 general admission. I said,  ‘You can’t do that. You have to cut everything in half.’ He said,  ‘I can’t make any money that way.’ I said,  ‘You’ve got to, Bob. These people can’t pay. We’ll make it up in volume.’ He said,  ‘If I lose money, you’re paying; I’m taking it out of your purse.’ I said take it out of my purse, but he didn’t lose money.

Mancini controlled every round, initially behind his jab, and later on with a pulverizing body attack that opened the challenger’s head up for winging hooks. Late in the sixth, Espana began to wilt, and the rampaging Mancini was close to a stoppage. Midway through the champion’s final assault, the bell rang to end the round but no one heard it. As Mancini continued to score on a near-helpless target, referee Stanley Christodoulou finally jumped in to stop the bout.