Born on this day: Marcel Cerdan 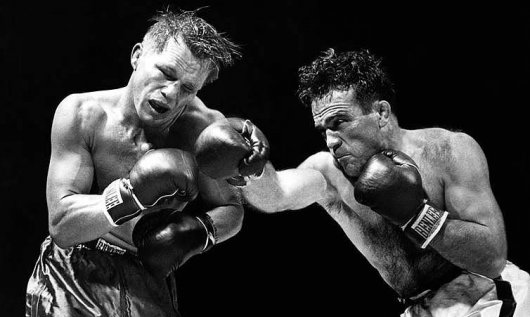 Some other times, a boxer can step in and do that job just as effectively as any of them.

One would think that France, land of poets and artists par excellence, would produce enough bright artistic minds to inspire their best musicians to perform at their highest level, but one of France’s greatest singers of all time found her inspiration in this non-stop puncher born in Africa to Spanish parents 106 years ago today.

Marcellin Cerdan was born on July 22, 1916 in Sidi Bel Abbes, at the time part of French Algeria, to a Spanish couple. He made his professional debut as a fighter at the age of 18 in Meknes, Morocco, and he built a reputation there as a two-fisted volume puncher that earned the nickname “The Moroccan Bomber.”

His rise to the top was nothing short of terrorizing: by the time he dropped a 15-round decision to Cyril Dellanoit in 1948, he had a 106-2 record with 63 stoppage wins, and with those two losses coming by way of disqualification for low blows. He would avenge the loss to Dellanoit with an emphatic points win in the immediate rematch in which he dropped the European champion twice in the process, and then he would move on to his signature win.

On September 21, 1948, Cerdan travel to America to meet Ring middleweight champion Tony Zale in Jersey City. “The Man of Steele” sustained such punishment in the brutal battle that he was forced to retire on his stool at the beginning of the 12th round, in what was later called the Fight of the Year by Ring magazine.

At the height of his fame, Cerdan was a celebrity in France, where he had a very publicized love affair with the country’s most beloved singer Edith Piaf, in spite of Cerdan being married with three children. The relationship generated more than a few fairy tale movies and books.

Cerdan’s fairy tale story and his love affair with his title belt, however, would end as dramatically as he acquired it. In a twisted déjà vu of his title-winning effort, Cerdan would quit on his stool as well in his first defense of the Ring belt against another movie-inspiring character in Jake LaMotta in June of 1946.

Cerdan was on his way back to the States to have his rematch with LaMotta when his plane crashed off the coast of Africa in the Portuguese colony of the Azores Islands.

He lived only 33 years, but his ring achievements, his memorable fights and his romance with the “Little Sparrow of Paris” live on.

Cerdan joined Zale and LaMotta in the International Boxing Hall of Fame in 1991.