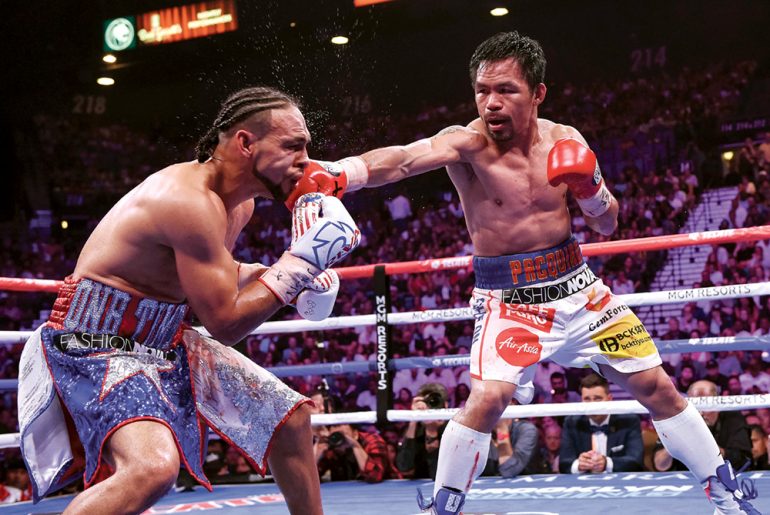 Pacquiao rolled back the years in a points win over Keith Thurman. Photo by Stewart Cook/ Fox Sports/ PictureGroup
20
Jul
by The Ring

On July 20, 2019, Manny Pacquiao scored a 12-round split decision over the previously unbeaten Keith Thurman to annex the WBA welterweight title at the MGM Grand in Las Vegas. One judge scored 114-113 for Thurman, but was overruled by two tallies of 115-112 for the Filipino hero.

Pacquiao, 40, became the oldest man in boxing history to win a legitimate version of the welterweight crown that night. His experience was key, but Pacquiao also defied Father Time with his speed and athleticism in what turned out to be his final triumph.

Despite being inactive and injury prone, Thurman was an elite-level operator. Many experts predicted that the 30-year-old boxer-puncher would have his way against the faded veteran, who was already a multi-weight world champion when Thurman turned pro.

Pacquiao floored Thurman with a long right hook in the opening round and performed brilliantly over the first half of the fight. Thurman came roaring back in the second half, but without the same consistency. The Floridian also did well to survive a massive left to the body that doubled him over in Round 10.

Thurman’s gutsy effort kept the fight close, but the decision was just.

Pacquiao would have one more fight – a comprehensive decision loss to Yordenis Ugas – before retiring in September 2021. Thurman returned to action in February of this year and scored an impressive 12-round decision over Mario Barrios.