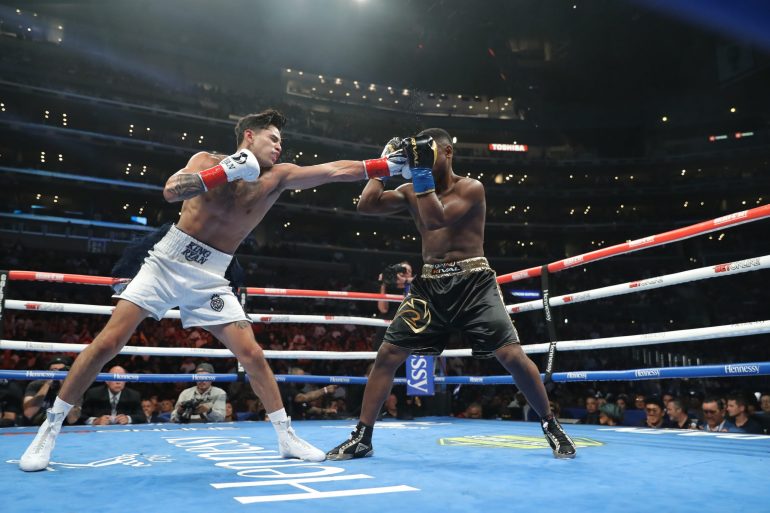 Ryan Garcia was too big, too fast and too strong for veteran Javier Fortuna. Photo by Tom Hogan / Golden Boy Promotions
16
Jul
by Doug Fischer |

LOS ANGELES – Ryan Garcia gave his home region fans a better show than his last outing in Texas thanks to the experience and guts of Javier Fortuna, who was overwhelmed by the 23-year-old star in the sixth round of a scheduled 12-round junior welterweight bout on Saturday.

In April, Garcia stalked a reluctant Emmanuel Tagoe for 12 rounds to the dismay of San Antonio fight fans in attendance at the AlamoDome, but he was able to thrill the 11,000-plus inside Crypto.com Arena by scoring two knockdowns and blocking a few of the bombs that Fortuna fired back before closing the show with a hook-right-hook combo 27 seconds into Round 6. 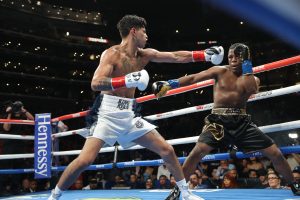 Garcia’s youth and size was too much for Fortuna. Photo by Tom Hogan / Golden Boy Promotions

The activity (two bouts in a three-month span) plus the added weight (both the Tagoe and Fortuna bouts were at junior welterweight, not lightweight where Garcia is ranked) worked in the younger man’s favor. Oh, and Fortuna’s sporadic aggression made him the perfect foil.

Both fighters did their best to avoid the other’s power shot – the left hook from Garcia, the overhand left from Fortuna – during the first three rounds, but Garcia eventually got the slippery southpaw’s timing and dropped him with a left to the body in Round 4. He scored a delayed knockdown with a hook to the head in Round 5, catching Fortuna just as the 33-year-old veteran was launching an overhand left.

“He hit hard,” Garcia said of Fortuna after the fight, which was streamed live on DAZN. “He has a hard fist, but I box better against punchers.

“He was trying to land the Luke Campbel shot. I think everybody is, but I’m ready for it.” 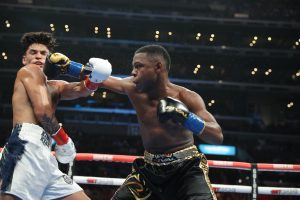 Fortuna had a few moments before being overwhelmed by Garcia. How would Tank Davis do against King Ry? Photo by Tom Hogan / Golden Boy Promotions

He’s also ready for bigger game. Fortuna was a solid opponent, an experienced former beltholder at 130 pounds and The Ring’s No. 9-rated lightweight, but the Dominican is not a star. There are very few bona-fide stars in boxing. Devin Haney, the undisputed lightweight champion who was in the arena, is not a star, either. Despite holding all the belts, Garcia didn’t notice Haney or bother to call him out after the fight.

“100% I felt way better (weighing in at 140 pounds), I’m not going back to 135 for nothing, but I want Tank next,” Garcia said during his post fight interview. “I’m never afraid, I have a spirit of competition. You’re going to see that when I fight Tank.”

The last time we saw welterweight prospect Alexis Rocha in the ring he was on a seek-and-destroy mission against dangerous fringe contender Blair Cobbs. He heavy handed Orange County native got the KO he was looking for, igniting his fans and moving up the Golden Boy Promotions ladder. 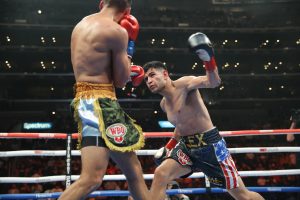 In the co-featured bout to Garcia-Fortuna, Rocha showed he can box with patience and technique by scoring a near shutout against Luis Veron on the Ryan Garcia-Javier Fortuna undercard on Saturday at Crypto.com Arena, but his fans – a growing contingent from his hometown of Santa Ana, California – are hoping to see the return of the “Lexecutioner” in his next bout.

Rocha-Veron was a game of cat and mouse – Rocha (20-1, 13 KOs) on the hunt, stalking behind a stiff jab; Veron (19-5-2, 9 KOs) on the move – that almost ended in Round 5 when the 25-year-old southpaw had the slippery Argentine staggering and stumbling in retreat.

But Rocha, who tried luring Veron into traps in Rounds 7 and 8 and then applied hard pressure in the final two, was unable to put his opponent down or out. He had to settle for 10 rounds of activity and a lopsided win via lopsided tallies of 100-90 (twice) 99-91.