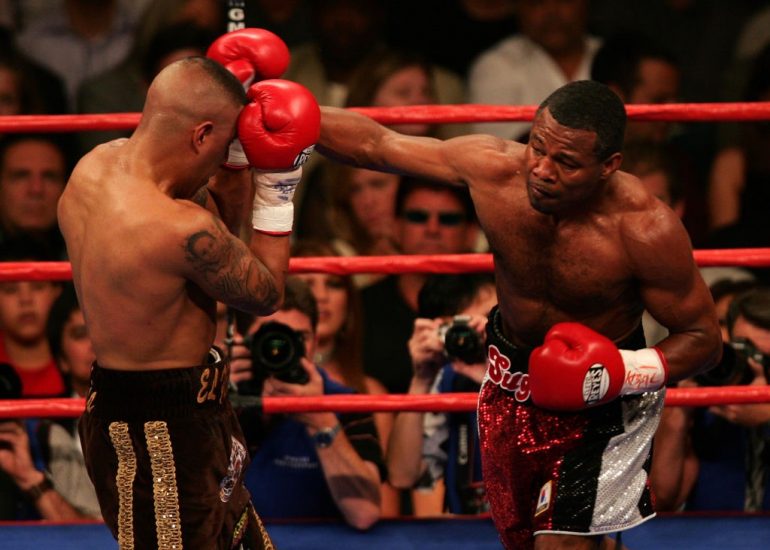 Mosley (right) on the attack against Vargas in their 2006 rematch. Photo by Craig Durling/ WireImage
15
Jul
by The Ring

On July 15, 2006, Sugar Shane Mosley put on a terrific display in scoring a sixth-round stoppage of Fernando Vargas at the MGM Grand in Las Vegas. The official time was 2:38 and the bout was contested at junior middleweight.

Mosley, who was already a three-weight world champion, had stopped Vargas five months earlier in a super-hyped Battle of Los Angeles. It was a highly competitive fight with Mosley securing a TKO 10 win when Vargas was pulled out due to grotesque swelling around his left eye.

The rematch was one-sided.

It had been rumored that Vargas struggled mightily to make the 154-pound limit for the Mosley sequel. He was slow and lethargic, whereas Mosley was quick, dynamic and bursting with energy.

After winning the first five rounds, Mosley got up on his toes in Round 6 and sought the opening. Vargas released a left jab which Mosley slipped perfectly before launching a thunderbolt left hook that dropped “El Feroz” flat on his back.

“When I was in the ring I remembered watching Oscar [De La Hoya] fight Vargas, and he threw that perfect left hook,” Mosley said afterwards. “I was bouncing around and I saw the opportunity and I threw the perfect left hook.”

Never one to surrender, Vargas incredibly found his feet. However, a brutal follow-up attack convinced referee Kenny Bayless to stop the fight.

“I think [Vargas] was weaker in this fight,” Mosley acknowledged. “He looked like was breaking down and I knew if I hit him with some good body shots he would break down even more.”