On this day: Manny Pacquiao outclasses and stops Lucas Matthysse 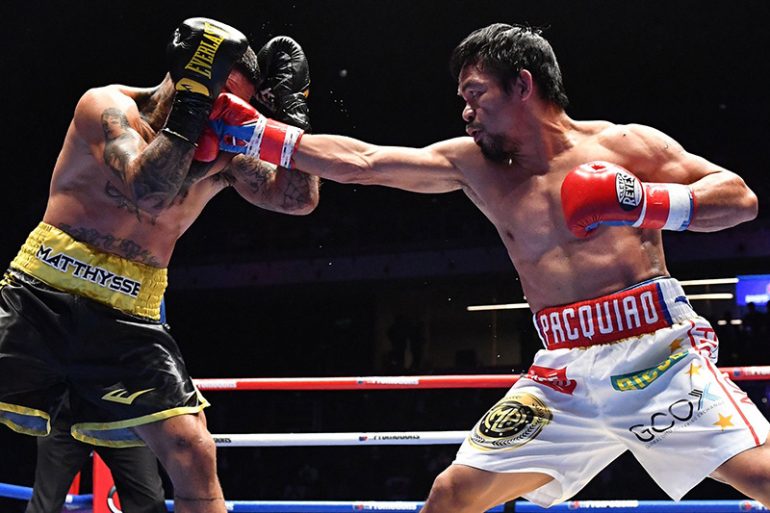 You can’t keep a good man down.

On July 15, 2018, Manny Pacquiao got back in the win column with a punch-perfect seventh-round stoppage of Lucas Matthysse at the Axiata Arena in Kuala Lumpur, Malaysia. The official time was 2:43.

Pacquiao, already an eight-weight world champion, was coming off a controversial points loss to Australian Jeff Horn a year earlier. There were many who felt the Philippines senator would never return, but their fears were quelled when he signed on to face the hard-hitting, albeit faded, Matthysse at welterweight.

The bout was completely one sided. Pacquiao landed dozens of flush shots on the Argentinian slugger, who was decked in the third, fifth and seventh rounds. The left uppercut was a signature shot and it was responsible for the final knockdown. Referee Kenny Bayless waved the bout off without completing the count.

Matthysse would ever fight again.

Incredibly, this was Pacquiao’s first stoppage victory in nine years. He’d scored nine wins (eight of those in world title bouts) by decision during that period, defeating the likes of Antonio Margarito, Shane Mosley, Juan Manuel Marquez and Tim Bradley.

In July 2019, Pacquiao would add another defining win to his resume, when he outpointed Keith Thurman (SD 12). This would be the great champion’s final world title triumph.