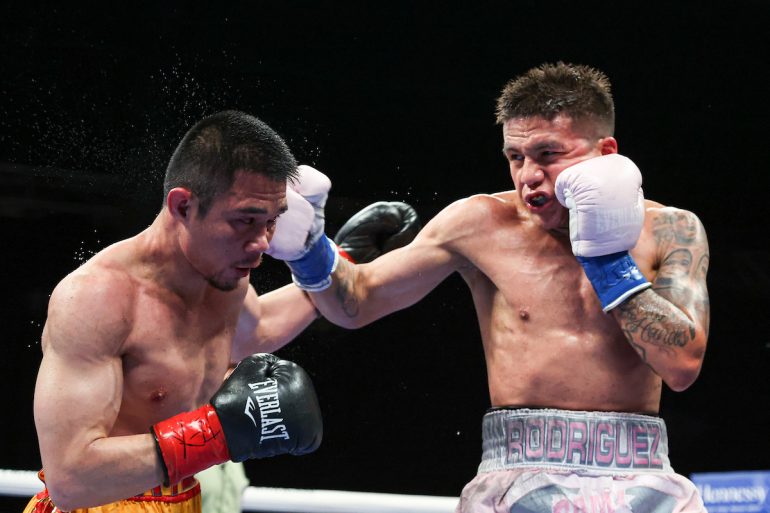 Three often-overlooked weight classes (in the U.S.) were in the spotlight from June 25 to July 9 – junior bantamweight, cruiserweight and featherweight – and, as is often the case with these divisions, the fans who tuned in were treated to action and drama.

This past Saturday, Rey Vargas reminded the boxing world of his skills and guts by getting up from the canvas to score an impressive split decision over Mark Magsayo for the WBC featherweight title. Vargas (36-0, 22 KOs) – a former WBC 122-pound titleholder who made five defenses from 2017-2019 before taking his lanky near-6-foot frame to featherweight – could have used his decided height and reach advantages to stick-and-move on the determined-but-outclassed Magsayo but the 31-year-old Mexican opted to hold his ground and exchange with the hard-hitting defending beltholder. 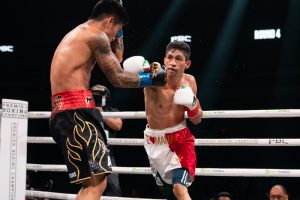 The aggressive tactics almost cost Vargas when he was dropped in Round 9, but he proved to be every bit as tough as he is ring savvy down the stretch. Vargas won the contest by official scores of 115-112 (twice), while the dissenting judge tallied 114-113 for Magsayo. Most observers agreed with the 115-112 scores for Vargas.

The Ring Ratings Panel inserted Vargas in the No. 2 slot, behind No. 1-ranked Emanuel Navarrete, while Magsayo, who suffered the first loss of his professional career, dipped to No. 3.

“As exciting and powerful as we see Mark Magsayo is, there seems to be no urgency in him to push advantages when needed,” noted Martin Mulcahey. “That seems his Achilles’ heel as in every fight he loses the plot for four rounds and needs to fight his way back. Having said that, Rey Vargas deserved the victory and high ranking given his previous world title reign at junior featherweight. Plus his size is fine even moving up.”

On July 2, unheralded (outside of Australia) Jai Opetaia won the Ring and IBF cruiserweight titles by impressively outboxing Mairis Breidis over the first half of their rousing 12-round bout, held in the Gold Coast of Queensland, and then bravely battling it out with the rugged veteran – with a broken jaw! – as the decorated Latvian tried to rally down the stretch.

“Impressive win for Jai Opetaia, and I think his superior boxing was pushed to the side by toughness shown battling through a broken jaw,” said Mulcahey. “Opetaia obviously gets our title belt, and I have no problem with Okolie jumping Briedis as well and going to No. 1, he has a really good resume and is closer to his physical prime than aging Briedis.” 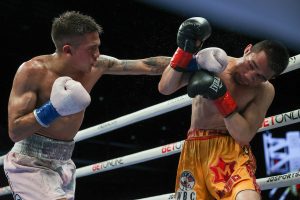 Bam Rodriguez’s eight-round stoppage of Srisaket Sor Rungvisai is one of the best performances of 2022. Photo by Melina Pizano/Matchroom

On June 25, newly crowned junior bantamweight titleholder Jesse “Bam” Rodriguez defended his WBC belt for the first time with a sensational performance against former Ring/WBC champ Srisaket Sor Rungvisai, who was stopped in the sixth round of their main event at Tech Point Arena in Bam’s hometown of San Antonio, Texas.

Sor Rungvisai, who owns victories over Roman Gonzalez and current Ring champ Juan Francisco Estrada, entered the bout as The Ring’s No. 1-rated 115 pounder. The Thai veteran is known for hard pressure and harder punches but he was outboxed, outworked, outmaneuvered and just plain outclassed by the 22-year-old southpaw, who had campaigned at 108 and 112 pounds before stepping up to junior bantamweight in February as a late-sub for former titleholder Carlos Cuadras. Rodriguez, the younger brother of junior bantamweight contender Joshua Franco, dropped and outpointed Cuadras to win the vacant WBC belt.

With those back-to-back victories, he’s become a major player in one of the deepest divisions and also one of the young guns – along with Shakur Stevenson, Devin Haney, Jaron Ennis, among a few others – that currently have hardcore fans excited about the sport’s future.

The Panel had to make the decision whether to advance the young gun to No. 1 or somewhere within the top three with legendary four-division veterans Gonzalez and Kazuto Ioka.

The Panel gave the “old heads” their due respect and rated Rodriguez No. 3, but Bam can be proud of being in the company of greatness at such a young age, and in the top three of one of the deepest divisions in boxing.

RING RATINGS UPDATE (as of July 9):

“Joyce got hit hard and too much by Hammer, which is now par for the course but he also walked down Hammer and well hammered him into defeat in four rounds,” noted Anson Wainwright. “Much like I remember saying about his last performance against Carlos Takam, it’s an impressive result but when you see the fight it looks less so. I’m not sure this win is enough to move up but it resets the activity clock. He looks well represented at No. 8.”

Cruiserweight – Opetaia is the new Ring champion after outpointing Briedis, who drops to No. 2.

Super middleweight – Erik Bazinyan advances to No. 8 after winning a 10-round unanimous decision over unrated gatekeeper Marcelo Esteban Coceres.

“Bazinyan won a workmanlike 10-round unanimous decision over Coceres,” noted Anson Wainwright. “Good learning curve. Coceres had given Billy Joe Saunders a lot of trouble in a title challenge and dropped and shook up Edgar Berlanga. It’s a close one but this win is probably enough for Bazinyan to move above Lerrone Richards.”

Junior middleweight – Magomed Kurbanov remains at No. 6 after scoring a wide decision over former WBO titleholder Patrick Teixeira. Israil Madrimov and Michel Soro remain at No. 8 and No. 9, respectively, after an unintentional clash of heads (which produced a bad cut on Soro) ended their rematch in the third round, resulting in an official technical draw verdict.

“Man, Soro just cannot get a break against Israil Madrimov,” said Mulcahey. “Not sure this one needs to be run back a third time. I think Madrimov is superior but irrefutable proof does not exist for that. I can see Kurbanov going up one spot, that was a solid win over a tough and still viable southpaw. On the Chisora-Pulev undercard, Irishman Caoimhin Agyarko looked pretty useful, and could be someone ranked at 154 in the future.”

Featherweight – Vargas enters at No. 2. Magsayo drops to No. 3.

“Brandon Figueroa got the very good bounce-back win over Carlos Castro,” noted Mulcahey. “I like everything I saw there and he remains a title threat. I would have Brandon in before (No. 10-rated) Joet (Gonzalez), he’s more consistent and wins more rounds against the best even in losing a performance.”

Junior featherweight – Murodjon Akhmadaliev remains at No. 2 after scoring a 12th-round TKO of Ronny Rios, who drops to No. 10. Brandon Figueroa exits the rankings after a successful featherweight debut. Zolani Tete enters at No. 10 following a fourth-round KO of unrated Jason Cunningham. 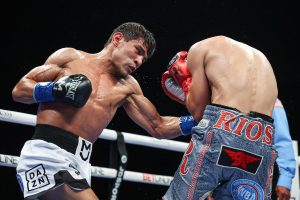 “Akhmadaliev looked really good stopping tough-as-they-come Rios in the final round to retain his IBF/WBA titles,” Wainwright said. “Akhmadaliev to maintain his No. 2 position. I’m not holding my breath but hope we see Fulton-Akhmadaliev for all the marbles to decide who is the undisputed champion.”

Added Mulcahey: “That was a complete performance from Murodjon. Akhmadaliev outsmarted, outboxed, and then knocked out tough Rios. Ronny still has a good enough resume for the No. 10 spot, but we definitely know his ceiling now, which is more high-level gatekeeper than contender. One more good win for Takuma Inoue at this weight and will I lobby for him to get into the top 10.”

Junior bantamweight – Jesse Rodriguez advances to No. 3. Srisaket Sor Rungvisai drops to No. 6.

Mulcahey agreed (as did everyone else on the Panel – and in boxing).

“Rodriguez’s performance was so incredible it has even gotten Boxing Twitter to unify behind his skills,” Mulchaey said. “Yeah, Bam to No. 3 for me and I’m not sure if Sor Rungvisai is a spent force or Bam is that good. I find myself agreeing with Anson again and the No. 6 spot seems just the landing spot until we find out for sure in SSR’s next fight.”

Added Wainwright: “Kosei Tanaka scored a highly impressive fifth round stoppage over previously unbeaten compatriot Masayoshi Hashizume. In just about any other weight class Tanaka would already be ranked. He definitely deserves to be ranked but don’t see how we can at the moment.”

“Gonzalez retained his WBO title for the first time, outpointing Barriga by 12-round decision,” said Wainwright. “Budler came on strong late in his fight with Soto. Budler scored a critical flash knockdown in the last round to edge matters by one point on all three scorecards. Budler to No. 3 and let’s keep Soto where he was at No. 4; that was such a close fight…Take out Jesse Rodriguez, he’s not going back to 108 pounds.”

Added Mulcahey: “Again Anson’s rankings make sense with Bam out and Hekkie jumping one spot over the guy he beat while keeping Elwin right behind him given the close nature of the fight. I watched a video of the fight today. It really had an Oscar De La Hoya-Ike Quartey feel to it with Budler’s strong finish to seal the win. I like how Calixto won in the UK (vs. Jay Haris last November), which seals his top 10 inclusion for me as well, but Olympian Hasanboy Dusmatov is right behind him. On talent alone Dusamatov is better, but he needs a couple more good wins.”

Strawweight – Daniel Valladeras enters at No. 6 after scoring a 12-round split decision over Rene Mark Cuarto, who drops to No. 7. Ginjiro Shigeoka advanced to No. 8 after stopping Naoya Haruguchi in four rounds. Yudai Shigeoka re-entered at No. 10 after knocking out unrated Cris Ganoza in three rounds.

“I hear a lot of good things about the Shigeoka brothers,” said Daisuke Suigura. “It’s not always easy to find the footage of Japanese local fights but these are the highlights of their latest title wins.”

Suigura included a link to a Japanese program that showed highlights of the Shigeokas’ recent victories.

Lightweight – “Frank Martin stopped late-sub Jackson Marinez in the 10th round,” said Wainwright. “Good win for Martin, who is in the 11-15 range. He probably would be ranked in some divisions. Maybe he just needs that one more win to force the issue.” 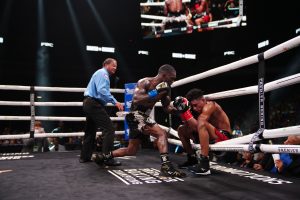 Added Mulcahey: “While Martin struggled more than I thought he would with Marinez, he also showed adaptability and fine stamina wearing a determined foe down. I think he is the next guy in, and that is still saying something in this packed division.”

Added Yours Truly: “Good point, Adam, although I think we usually remove a fighter moving up in weight from their current ranking AFTER they actually fight at the new weight. However, if we do decide to drop Lopez from 135, I think Frank Martin should definitely come in at No. 10. He’s worthy in my view.”

Added Wainwright: “Like Doug says, the usual practice is to wait until they fight in the next division. It’s a few weeks away. I’d wait till then.”

Featherweight – “Brandon Figueroa stopped Carlos Castro in six-rounds in his featherweight debut,” said Wainwright. “I could see us taking out (Kiko) Martinez, who it wouldn’t surprise me if he retires, and Kid Galahad, who has mentioned moving up in weight, and keeping Joet Gonzalez ranked and bringing in Brandon Figueroa at No. 10. Just an idea.”

Junior bantamweight – “Kosei Tanaka scored a highly impressive fifth-round stoppage over previously unbeaten compatriot Masayoshi Hashizume,” said Wainwright. “In just about any other weight class Tanaka would already be ranked. He definitely deserves to be ranked but don’t see how we can at the moment.”

Added Mulcahey: “I have no problem dropping Ronny Rios (No. 10 before Figueroa was dropped and Tete came in) in favor of Kosei Tanaka, that is a prime example of two fighters moving in opposite career trajectory.”