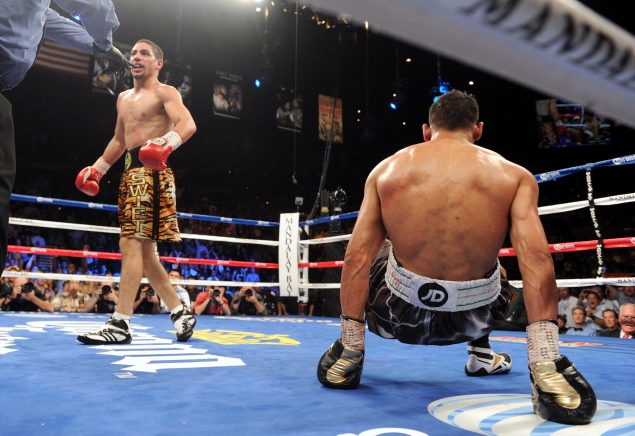 Garcia floors Khan in Round 3.
14
Jul
by The Ring

It only takes one mistake to change the course of a fight.

Khan, who entered as the WBA titleholder and had the added incentive of vying for the vacant Ring championship, was boxing brilliantly through the first two plus rounds when disaster struck.

The then-unbeaten Garcia couldn’t match Khan for speed, but he was smart and bided his time. Late in Round 3, Khan made the miscalculation of throwing power shots as his legs carried him into range and Garcia unleashed a heavy left hook counter that floored the Englishman heavily.

Khan’s world was turned upside down.

Despite there being only 10 seconds remaining in the round when the action resumed, Garcia managed to land another brutal left hook that left his prey reeling at the bell.

With his legs unsteady and a rampaging opponent in front of him, Khan could no longer box off the target and make life easy for himself. Garcia pursued relentlessly and released massive rights to the head. Khan bravely absorbed several meaty headshots, but went down again from a pair of glancing blows.

The defending champ found his feet, but he was woozy and had no legs. Referee Kenny Bayless looked at him closely and wisely stopped the fight.

Garcia defended four times before moving on to welterweight.