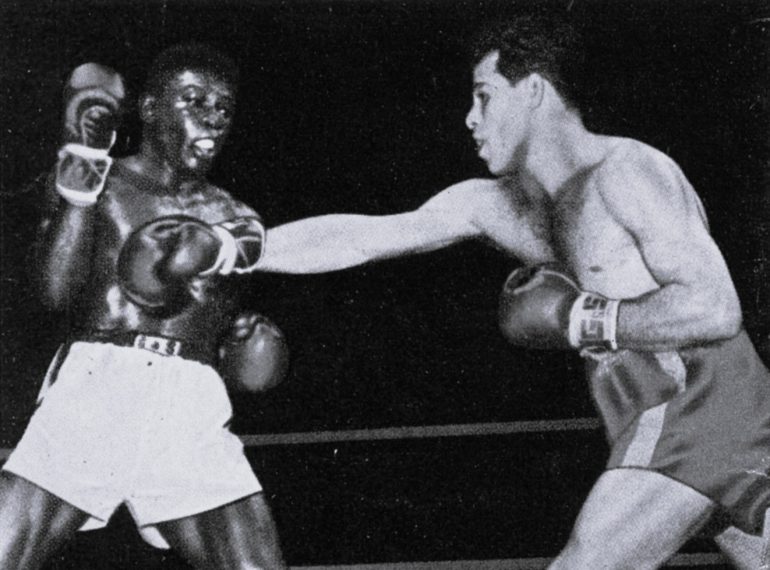 Griffith (left) was in his second reign as welterweight champ against Dupas.
13
Jul
by The Ring

Six world championships in three weight divisions and one of the most underrated boxing greats of all time.

On July 13, 1962, Emile Griffith scored a 15-round unanimous decision over New Orleans’ Ralph Dupas at the Convention Center in Las Vegas. The official scores, which were tabulated using the five-point must-system, were 74-65, 73-69 and 71-64.

Still emotionally fragile in the aftermath of Paret’s death, Griffith displayed more punch picking than power punching against Dupas. The No. 1-rated challenger, who entered the ring with a 94-15-6 record, deserved his title shot, but Griffith was still levels above.

Dupas did fight well at times. He feinted Griffith out of position, moved both ways, and even displayed some switch hitting ability. However, the challenger ran out of steam, and Griffith enjoyed his biggest moments, albeit with a hint of caution, in a dominant final round.

“Yes, I thought about Benny in there,” said the champion during a post-fight press conference. “In the 15th when I had Dupas in the corner I stopped and looked at him again and I stepped away. But instinct took over most of the time. This fight did a lot for me. The next fight will do a lot more. Time, they tell me, is a great healer. The more fights I have, I pray and I hope that I will forget.”

Dupas, who had failed in a bid to win the lightweight title from Joe Brown earlier in his career, would eventually claim the junior middleweight championship at the expense of Denny Moyer.